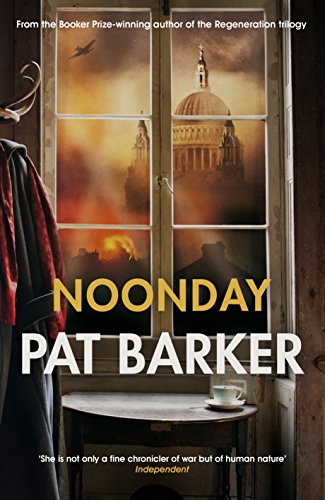 Used Price
$36.99
inc. GST
Free Shipping in Australia
Paul Tarrant, Elinor Brooke and Kit Neville first met in 1914 at the Slade School of Art, before their generation lost hope, faith and much else besides on the battlefields of Ypres and the Somme. Now it is 1940, they are middle-aged, and another war has begun.
Like New Very Good Good

In Noonday, Pat Barker - the Man Booker-winning author of the definitive WWI trilogy, Regeneration - turns for the first time to WWII.

'Afterwards, it was the horses she remembered, galloping towards them out of the orange-streaked darkness, their manes and tails on fire...'

London, the Blitz, autumn 1940. As the bombs fall on the blacked-out city, ambulance driver Elinor Brooke races from bomb sites to hospitals trying to save the lives of injured survivors, working alongside former friend Kit Neville, while her husband Paul works as an air-raid warden.

Once fellow students at the Slade School of Fine Art, before the First World War destroyed the hopes of their generation, they now find themselves caught in another war, this time at home. As the bombing intensifies, the constant risk of death makes all three of them reach out for quick consolation. Old loves and obsessions re-surface until Elinor is brought face to face with an almost impossible choice.

Completing the story of Elinor Brooke, Paul Tarrant and Kit Neville, begun with Life Class and continued with Toby's Room, Noonday is both a stand-alone novel and the climax of a trilogy. Writing about the Second World War for the first time, Pat Barker brings the besieged and haunted city of London into electrifying life in her most powerful novel since the Regeneration trilogy.

'She is not only a fine chronicler of war but of human nature.' Independent

'You go to her for plain truths, a driving storyline and a clear eye, steadily facing the history of our world.' The Guardian

'Barker is a writer of crispness and clarity and an unflinching seeker of the germ of what it means to be human." The Herald

'Magnificent; I finished it eagerly, wanting to know what happened next, and as I read, I was enjoying, marvelling and learning' Chimamanda Ngozi Adichie

Other titles in the trilogy:
Life Class
Toby's Room

Publisher's description. Pat Barker brings the besieged and haunted city of Blitz-era London to electrifying life in Noonday, the third and final novel in her 'Life Class Trilogy'. Bombs are falling on London and, still suffering from the losses of the Great War, Elinor, Paul and Kit must face war's horrors once again... * Penguin *
Barker's command of detail and gift for metaphor are as sharp as ever: her evocation of the bombed city is terrific, and every night patrol is steeped in drama... As a tribute to those who dared and suffered on the home front, Noonday is in the first rank * Mail on Sunday *
Tremendously good * Daily Mail *
Bold, hard-hitting, unforgettable... a virtuoso rendition of the bombing, as huge swathes of London blaze away with the brightest of bright lights... Barker shows us how the city's finest moment was indubitably also its most terrifying, with luminous and unsparing insight * Independent on Sunday *
This is the first time the author of the Regeneration Trilogy has written about the Second World War and it's a triumph * Stylist *
Ambitious, vivid, sharp... she writes with precision about distinct effects on the senses - the "edge of darkness buzzing"... Barker's chronological leap is a sophisticated bridge between the drama of the present and the haunted history of the past... The closer you get to the end, the more lives need saving and the more thwarted and complicated the domestic backdrop * Daily Telegraph *
Colourfully alive, fizzes with energy... the novel's point of view swivel[s] like a torchbeam to illuminate London's devastated streets * Independent *
Many strokes of genius from Barker... accessible and moving * Sunday Times *

Powerful and vivid, with nuanced characters and Barker's unerring eye for detail

* Women and Home *
Noonday's Blitz-era setting gives Barker ample opportunity to do what she does best: intent descriptions of splayed limbs that are sometimes engaged in the act of love, occasionally the subjects of paintings or, more often, casualties of war * Spectator *
The book has its own inherent power thanks to Barker's skilful rendering of the texture of the period but it is richer and more rewarding if read with the other two volumes of this beautifully crafted trilogy * Daily Express *

Pat Barker was born in Yorkshire and began her literary career in her forties, when she took a short writing course taught by Angela Carter. Encouraged by Carter to continue writing and exploring the lives of working class women, she sent her fiction out to publishers. Thirty-five years later, she has published sixteen novels, including her masterful Regeneration Trilogy, been made a CBE for services to literature, and won awards including the Guardian Fiction Prize and the UK's highest literary honour, the Booker Prize.

Her last novel, The Silence of the Girls, began the story of Briseis, the forgotten woman at the heart of one of the most famous war stories ever told. It was shortlisted for the Women's Prize for Fiction and the Gordon Burn Prize, and won an Independent Bookshop Award 2019. The Women of Troy continues that story. Pat Barker lives in Durham.

GOR010740213
Noonday by Pat Barker
Pat Barker
The Life Class Trilogy
Used - Like New
Paperback
Penguin Books Ltd
2015-08-27
272
0241146070
9780241146071
N/A
Book picture is for illustrative purposes only, actual binding, cover or edition may vary.
The book has been read, but looks new. The book cover has no visible wear, and the dust jacket is included if applicable. No missing or damaged pages, no tears, possible very minimal creasing, no underlining or highlighting of text, and no writing in the margins.