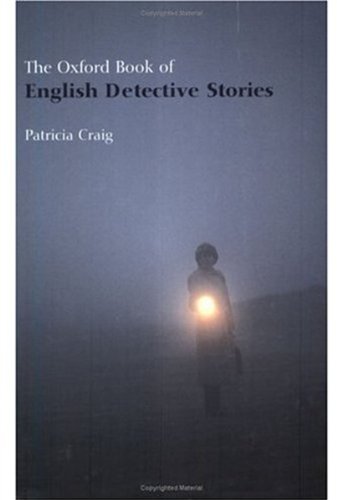 The Oxford Book of English Detective Stories
by Patricia Craig

Used Price
$17.99
inc. GST
Free Shipping in Australia
Every age has produced detective fiction that exemplifies its distinctive manners and customs, from early sedate tales, to the debonair detection of the 1920s, to post-World War II realism. This book offers 33 stories, from Conan Doyle and Agatha Christie, to Ruth Rendell and P.D. James.
Good

The Oxford Book of English Detective Stories by Patricia Craig

The detective story as we know it came into being in the 1890s with The Adventures of Sherlock Holmes, and has never looked back. Its popularity has a good deal to do with its pungency, and with its power to intrigue and absorb the reader while abiding by the rules of the genre (however flexible these have become). Every age has produced a kind of detective fiction that exemplifies its distinctive manners and customs, from the sedate tales which began to appear in the wake of Sherlock Holmes to the debonair detection of the 1920s and after. The short tale of crime took off in many directions, with the authors such as Anthony Berkley, Freeman Wills Crofts, Carer Dickson, and Edmund Crispin bringing the utmost expertise, originality, and ingenuity to bear on the detective theme. An increasing realism is apparent from the post-war era on, though with no diminution in entertainment value. And as we come up to the present, the detective story has been adapted further to accommodate other facets of modern life. This collection of 33 stories shows the scope, vigour, and enduring fascination of the detective story, as well as indicating its importance as a barometer of social attitudes and literary practices. It gathers together a wide range of stories, many unfamiliar, by writers including Julian Symons, Michael Gilbert, P. D. James, and Ruth Rendell, which are among the very best examples of English detective writing of the twentieth century - the cream of crime.

Patricia Craig was born and educated in Belfast before moving to London, where she now lives. She is a freelance critic and reviewer, and has edited several anthologies, including Oxford Books of Detective Stories, Ireland, and Modern Women's Stories.

GOR001712167
The Oxford Book of English Detective Stories by Patricia Craig
Patricia Craig
Oxford Books of Prose S.
Used - Good
Paperback
Oxford University Press Inc
2002-11-28
576
0192803751
9780192803757
N/A
Book picture is for illustrative purposes only, actual binding, cover or edition may vary.
The book has been read but remains in clean condition. All pages are intact and the cover is intact. Some minor wear to the spine.