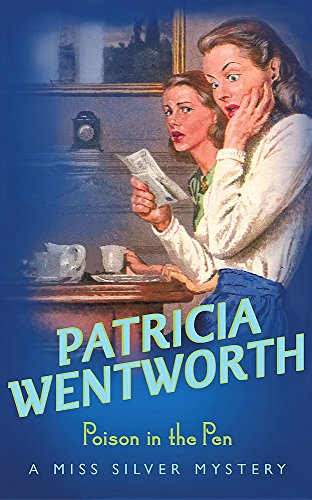 Poison in the Pen
by Patricia Wentworth

Poison in the Pen Summary

Poison in the Pen by Patricia Wentworth

Tilling Green was a charming little village nestling in the Ledshire countryside. Not at all the sort of place you would expect to find an anonymous letter writer. And when one of the recipients, a young woman, was found drowned in the lake belonging to the Manor House, Miss Silver was persuaded to go and investigate.

Valentine Grey, the pretty young heiress from the Manor House, was marrying one Gilbert Earle, but on the night of Valentine's pre-wedding party Jason Leigh, Valentine's former love, returned after months without a word. Valentine discovered Gilbert in a compromising situation with her guardian's wife. And several people received extremely nasty letters. Connie Brooks knew who had written those letters. But on the same night, she was murdered . . .

Poison in the Pen Reviews

Miss Wentworth is a first-rate storyteller * Daily Telegraph *
Miss Silver has her place in detective fiction as surely as Lord Peter Wimsey or Hercule Poirot * Manchester Evening News *
You can't go wrong with Miss Maud Silver. * Observer *
Miss Silver is marvellous * Daily Mail *
Patricia Wentworth has created a great detective in Miss Silver, the little old lady who nobody notices, but who in turn notices everything * Paula Gosling *
...some of the best examples of the British country-house murder mystery * Alfred Hitchcock Magazine *

Patricia Wentworth was born in Uttarakhand, India but as a young girl moved to London to study at Blackheath High School for Girls. After writing several romances she turned her hand to crime fiction. She wrote dozens of bestselling mysteries before her death in 1961, and is recognised as one of the mistresses of classic crime fiction.

GOR001411334
Poison in the Pen by Patricia Wentworth
Patricia Wentworth
Miss Silver Series
Used - Very Good
Paperback
Hodder & Stoughton General Division
1985-07-01
336
0340217928
9780340217924
N/A
Book picture is for illustrative purposes only, actual binding, cover or edition may vary.
This is a used book - there is no escaping the fact it has been read by someone else and it will show signs of wear and previous use. Overall we expect it to be in very good condition, but if you are not entirely satisfied please get in touch with us.