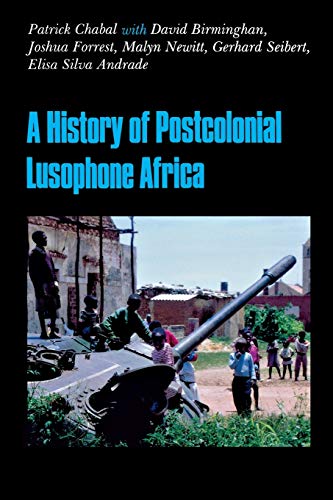 A History of Postcolonial Lusophone Africa by Patrick Chabal

A History of Postcolonial Lusophone Africa by Patrick Chabal

"This book, produced by the obvious-and distinguished-corps of country specialists . . . fills a real gap in both state-level and 'regional' (broadly defined) studies of contemporary Africa." -Norrie MacQueen, University of Dundee

Although the five Portuguese-speaking countries in Africa that gained independence in 1974/75-Angola, Mozambique, Guinea-Bissau, Cape Verde, and Sao Tome e Principe-differ from each other in many ways, they share a history of Portuguese rule going back to the 15th century, which has left a mark to this day. Patrick Chabal and his co-authors assess the nature of the Portuguese legacy, using a twofold approach. In Part I, three analytical, thematic chapters by Chabal examine what the five countries have in common and how they differ from the rest of Africa. In Part II, individual chapters by leading specialists, each devoted to a specific country, survey the histories of those countries since independence. The book places the postcolonial experience of the Lusophone countries within the context of their precolonial and colonial past and compares and contrasts their experience with that of non-Lusophone African states. The result is a comprehensive, readable, and up-to-date text and reference work on the evolution of postcolonial Portuguese-speaking Africa.

This volume constitutes a uniquely distinctive history of postindependence Portuguese-speaking Africa as well as of the final decades of colonial rule. What warrants immediate comment is that . . . this volume should also have special appeal for readers interested in the postcolonial literature of lusophone Africa.36.1

This history of five African Portuguese-speaking countries since they gained independence from Portugal in 1974-75 is a challenge for two major reasons. First, the countries defy easy comparison, being different in size, geography, and socioeconomic profile. Second, they frequently have more in common with their regional neighbors than with one another. This volume slices into the project from two angles. In part 1, Chabal (Univ. of London) writes three thematic chapters that analyze what these countries have in common and how they differ from and are similar to the rest of Africa. They cover the end of empire (wars and decolonization), the construction of the nation-state (nationalism, power relationships, socialism and international affairs), and the limits of nationhood (partisan and political rivalries). These three chapters are concise, well organized, balanced, perceptive, critical, and insightful. Part 2 provides five country chapters, each by a different scholar of the area. The chapters on Angola, Mozambique, and Guinea-Bissau are well written, especially on the wars, politics, and the economy. Less successful are the two chapters on Cape Verde and Sao (Sao) Tome (Tome) e Principe (Principe) , which tend to lack critical analysis and be too dependent on official reports and data sources. A useful bibliography is organized by country. Upper-division undergraduates and above.

Patrick Chabal is Professor of Lusophone African Studies, University of London, and Head of the Department of Portuguese and Brazilian Studies at King's College, London. He is co-author (with Jean-Pascal Daloz) of Africa Works: Disorder as Political Instrument (Indiana University Press).

1. The end of empire
2. The construction of the nation-state
3. The limits of nationhood

NLS9780253215659
9780253215659
025321565X
A History of Postcolonial Lusophone Africa by Patrick Chabal
Patrick Chabal
New
Paperback
Indiana University Press
2002-06-13
346
N/A
Book picture is for illustrative purposes only, actual binding, cover or edition may vary.
This is a new book - be the first to read this copy. With untouched pages and a perfect binding, your brand new copy is ready to be opened for the first time
Trustpilot