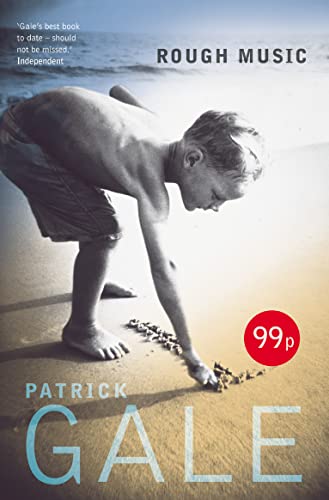 Julian as a small boy is taken on the perfect Cornish holiday. When glamorous American cousins unexpectedly swell the party, however, emotions run high and events spiral out of control. Though he has been brought up in the forbidding shadow of the prison his father runs, though his parents are neither as normal nor as happy as he supposes, Julian's world view is the sunnily selfish, accepting one of boyhood. It is only when he becomes a man - seemingly at ease with love, with his sexuality, with his ghosts - that the traumatic effects of that distant summer rise up to challenge his defiant assertion that he is happy and always has been.

'Like the sea he describes so well, Patrick Gale's clear, unforced prose sucks one in effortlessly ... he is excellent at the telling detail and description.' Elizabeth Buchan, Daily Mail

'There are no false notes in this book.' Marie Claire

'Rough Music ... is an astute, sensitive and at times tragically uncomfortable meditation on sex, lies and family.... a fabulously unnerving book... a hugely compelling writer.' Independent on Sunday

'It would be churlish to divulge more of the plot, suffice to say that it is as ingenious in design as it is generous in spirit.' Sunday Express

`Patrick Gale's novels grip tightly, like swaddling clothes, stunning the reader into a state of lolling, contented absorption. How does he do it?' TLS

'Rough Music, like its predecessors, belongs to a broad canon of works by English rural moralists. Think Austen, Hardy or Murdoch ... His plots - seemingly effortless, but closely structured - resemble Iris Murdoch's ... Gripping, elegant and wise, it is Gale's best book to date, and should not be missed.' The Weekend Review, Independent

Patrick Gale was born on the Isle of Wight in 1962. He spent his infancy at Wandsworth Prison, which his father governed, then grew up in Winchester. He now lives on a farm near Land's End. As well as writing and reviewing fiction, he has published a biography of Armistead Maupin, a short history of the Dorchester Hotel and chapters on Mozart's piano and mechanical music for H.C. Robbin Landon's The Mozart Compendium. His most recent novels are The Facts of Life and Tree Surgery for Beginners.

GOR003037108
Rough Music by Patrick Gale
Patrick Gale
Used - Very Good
Paperback
HarperCollins Publishers
2005-03-07
384
0007210426
9780007210428
N/A
Book picture is for illustrative purposes only, actual binding, cover or edition may vary.
This is a used book - there is no escaping the fact it has been read by someone else and it will show signs of wear and previous use. Overall we expect it to be in very good condition, but if you are not entirely satisfied please get in touch with us.