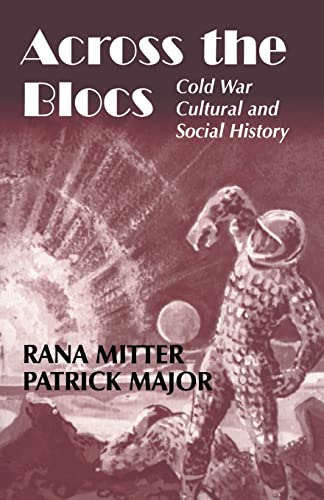 Across the Blocs
by Patrick Major

Used Price
$84.99
inc. GST
Free Shipping in Australia
This book asks the reader to reassess the Cold War not just as superpower conflict and high diplomacy, but as social and cultural history.
Reviews:
Trustpilot
Like New

Across the Blocs Summary

This book asks the reader to reassess the Cold War not just as superpower conflict and high diplomacy, but as social and cultural history. It makes cross-cultural comparisons of the socio cultural aspects of the Cold War across the East/West block divide, dealing with issues including broadcasting, public opinion, and the production and consumption of popular culture.

Customer Reviews - Across the Blocs

Across the Blocs Reviews

'Historical science would do well to emphasize the status of ther east-West conflict as a struggle for cultural meaning - as a 'war of intellects'. This book helps that process.'

1. East is East and West is West?: Towards a comparative sociocultural history of the Cold War 2. The Man Who Invented Truth: The tenure of Edward R. Murrow as director of the United States Information Agency during the Kennedy years 3. Soviet Cinema in the Early Cold War 4. Future Perfect?: Communist science fiction in the Cold War 5. The Education of Dissent: Radio free Europe and Hungarian society, 1951-56 6. The Debate over Nuclear Refuge 7. Some Writers Are More Equal Than Others: George Orwell, the state and Cold War propaganda

GOR010861201
Across the Blocs: Exploring Comparative Cold War Cultural and Social History by Patrick Major
Patrick Major
Cold War History
Used - Like New
Paperback
Taylor & Francis Ltd
2004-02-19
160
0714684643
9780714684642
N/A
Book picture is for illustrative purposes only, actual binding, cover or edition may vary.
The book has been read, but looks new. The book cover has no visible wear, and the dust jacket is included if applicable. No missing or damaged pages, no tears, possible very minimal creasing, no underlining or highlighting of text, and no writing in the margins.