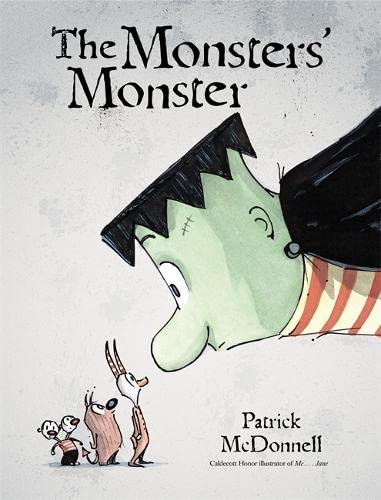 The Monsters' Monster
by Patrick McDonnell

The Monsters' Monster by Patrick McDonnell

Once upon a time, there were three little rascals who thought they were the BIGGEST, BADDEST monsters around. But when they decide to build a huge monster of their own, he isn't exactly what the creatures were expecting. He's happy. He giggles. He's just grateful to be alive. And he has a lesson for his grouchy creators that only takes two little words.

Praise for The Monster's Monster A New York Times Bestseller
An Indiebound BestsellerA National Parenting Publications Awards (NAPPA) Silver WinnerA Barnes & Noble Best Book of 2012
* "The story charms, but it is the overall thoughtful design that makes this a frightfully amazing book to read. Make time to share with young monsters everywhere."--Kirkus Reviews, starred review
* "McDonnell's greatest strength is to explore with tenderness the finest instincts humans show.... Another winner."--Publishers Weekly, starred review
* "This delightful title will provide a new option for 'not so scary' monster storytimes."--School Library Journal, starred review
"McDonnell arranges the tale so that it blooms like a dawning day.... Relax, little monsters, and enjoy the day."--Booklist
"Simple yet inspired."--New York Times Book Review
"Succinct and snappy."--The Bulletin

Patrick McDonnell is the author and illustrator of the Caldecott Honor book Me . . . Jane, winner of the 2012 Charlotte Zolotow Award and a New York Times Best Illustrated Children's Book. He is also the creator of the beloved internationally syndicated comic strip Mutts, which features the characters that star in five of his previous picture books, The Gift of Nothing, Hug Time, Just Like Heaven, Wag!, and South. He has also written and illustrated the award-winning picture book Art.

Patrick is a member of the board of directors of the Humane Society of the United States. He lives in New Jersey with his wife, Karen; their two formerly feral cats, MeeMow and Not Ootie; and their adopted terrier, Amelie.

GOR008738936
The Monsters' Monster by Patrick McDonnell
Patrick McDonnell
Used - Very Good
Hardback
Little, Brown & Company
2012-09-04
48
0316045470
9780316045476
Short-listed for Washington Children's Choice Picture Book Award 2014
Book picture is for illustrative purposes only, actual binding, cover or edition may vary.
This is a used book - there is no escaping the fact it has been read by someone else and it will show signs of wear and previous use. Overall we expect it to be in very good condition, but if you are not entirely satisfied please get in touch with us.