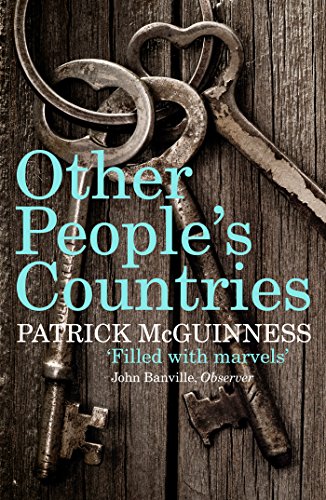 Other People's Countries
by Patrick McGuinness

Other People's Countries: A Journey into Memory by Patrick McGuinness

Winner of the 2014 Duff Cooper Prize Winner of the 2015 Welsh Book of the Year Award Shortlisted for the 2015 James Tait Black Memorial Prize Shortlisted for the 2015 PEN Ackerley prize Longlisted for the 2014 Thwaites Wainwright Prize Let me take you down the thin cobblestoned streets of the Belgian border town of Bouillon. Let me take you down the alleys that lead into its past. To a town peopled with eccentrics, full of charm, menace and wonder. To the days before television, to Marie Bodard's sweetshop, to the Nazi occupation and unexpected collaborators. To a place where one neighbour murders another over the misfortune of pigs and potatoes. To the hotel where the French poet Verlaine his lover Rimbaud, holed up whilst on the run from family, creditors and the law. This exquisite meditation on place, time and memory is an illicit peek into other people's countries, into the spaces they have populated with their memories, and might just make you revisit your own in a new and surprising way.

"McGuinness is a marvellous writer... On every page there are breathtakingly gorgeous images, similes, metaphors." -- John Banville * Observer *
"McGuinness has written the great book on Belgium and modern memory, or even Belgium and modern being. He takes his place among those singers and painters of the haunted, the melancholy, the diminished, the caricatural, the humdrum." -- Michael Hofmann * Guardian *
"Lyrical and evocative... This is a very Proustian memoir, whose effect will be to drive the reader into contemplation of their own half-forgotten childhood home." -- Josh Glancy * Sunday Times *
"A rich analysis of home and homelessness." -- James Wood * London Review of Books *
"This book had a powerful effect on me... Sometimes hilarious, sometimes freighted with tragedy." -- Gillian Tindall * Literary Review *

Born in Tunisia, Patrick McGuinness is the author of The Last Hundred Days, which was longlisted for the 2011 Man Booker Prize, shortlisted for the 2011 Costa First Novel Award and won the 2012 Wales Book of the Year Award and the 2012 Writers' Guild Prize for Fiction. His other books include two collections of poems, The Canals of Mars (2004), and Jilted City (2010), He is a Fellow of St. Anne's College, Oxford, where he lectures in French.

GOR007091605
Other People's Countries: A Journey into Memory by Patrick McGuinness
Patrick McGuinness
Used - Very Good
Paperback
Vintage Publishing
2015-03-19
208
0099587033
9780099587033
Winner of Pol Roger Duff Cooper Prize 2015 (UK) Winner of Wales Book of the Year 2015 (UK) Short-listed for PEN/ Ackerley Prize 2015 (UK)
Book picture is for illustrative purposes only, actual binding, cover or edition may vary.
This is a used book - there is no escaping the fact it has been read by someone else and it will show signs of wear and previous use. Overall we expect it to be in very good condition, but if you are not entirely satisfied please get in touch with us.