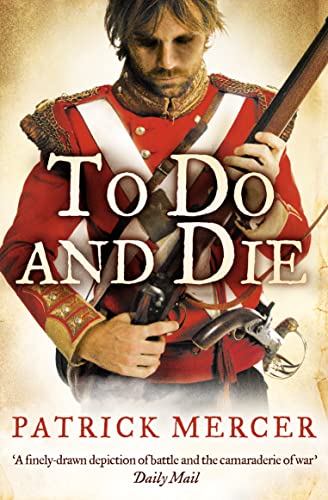 To Do and Die
by Patrick Mercer

To Do and Die Summary

To Do and Die by Patrick Mercer

1854. War is imminent as the Western powers quarrel with Russia over fragments of the crumbling Ottoman empire. Wanting to prove himself to a father who will not let him forget about his own self-proclaimed military glories, Officer Tony Morgan is keen to set sail. Meanwhile, the Morgan's chambermaid, Mary, whom Tony loves but cannot marry, has wedded another officer in his company and will be accompanying the regiment to the front as a nurse.

Arriving at Sebastapol in the Crimea, the company's first engagement with the Russians fill the company with a short-lived confidence. Morgan is eager to show himself a worthy leader, but in the face of several bloody engagements which decimate the company, he finds himself shaken to the core by the brutality of war. He also has to quell potential mutiny against the cowardly subaltern Carmichael, whose first instincts are always to save his own skin. His romantic longings for Mary are revived after her husband is severely injured and she nevertheless proves herself a noble and brave addition to the company. Facing dire conflict on the battlefield and off, within his company and within himself, Morgan is going to be tested to the limits...

In his fiction debut, Mercer's twenty years of military service is all there on the page. His mastery of both the broad sweep and the finer details of military engagement is superb and bound to make an impact with military action fans. His characterisation of the regiment is wholly persuasive and he nails soldier psychology, slang and the interactions up and down the chain of command with deceptive ease. This is probably the closest any of us will get to being in a battle.

To Do and Die Reviews

Praise for To Do and Die:

`Mercer's prose is muscular yet silky smooth. His depiction of the experience of battle is unsurpassed'
Saul David, author of Zulu Dawn

`Mercer creates colourful, believable characters that stay true to the dialect of the time, but remain recognisable to any modern soldier. Fans of Sharpe, Flashman or Matthew Hervey should enjoy this novel'
Soldier magazine

Born in 1956, Patrick Mercer read History at Oxford University before joining the Army. He commanded his battalion in Bosnia and Canada. Previously receiving a gallantry commendation, he was awarded the OBE in 1997. In 1999, Patrick Mercer accepted a post as the Defence Reporter for the Today Programme. In the 2001 election, he won the Tory seat in Newark. A respected historian, he has already published a non-fiction account of the Inkerman battle during the Crimean War.

GOR001627280
To Do and Die by Patrick Mercer
Patrick Mercer
Used - Very Good
Paperback
HarperCollins Publishers
2010-01-21
400
0007302800
9780007302802
N/A
Book picture is for illustrative purposes only, actual binding, cover or edition may vary.
This is a used book - there is no escaping the fact it has been read by someone else and it will show signs of wear and previous use. Overall we expect it to be in very good condition, but if you are not entirely satisfied please get in touch with us.