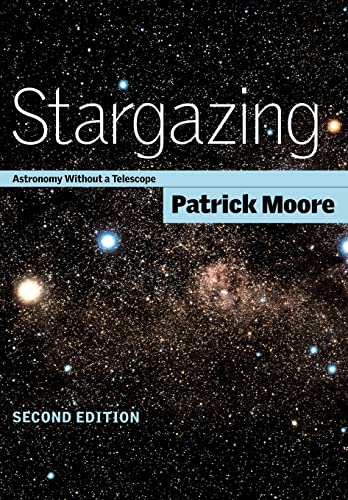 In Stock
$19.99
inc. GST
Britain's best known astronomer explains everything you need to know about the universe visible to the naked eye. Using charts and illustrations, he describes the night sky month by month, and looks at the Sun, the Moon, planets, comets and other celestial phenomena.
Very Good Good Well Read
Only 1 left

Stargazing: Astronomy without a Telescope by Patrick Moore

On a clear night, the vastness and beauty of the star-filled sky is awe-inspiring. In Stargazing: Astronomy without a Telescope Patrick Moore, Britain's best known astronomer explains all you need to know about the universe visible to the naked eye. With the aid of charts and illustrations he examines how to 'read' the stars, to know which constellations lie overhead, their trajectory throughout the seasons, and the legends ascribed to them. In a month-by-month guide he describes, using detailed star maps, the night skies of both the northern and southern hemispheres. He also takes a look at the planets, the Sun and the Moon and their eclipses, comets, meteors, as well as aurorae and other celestial phenomena - all in accessible scientific detail. Astronomy is for everyone, and even with just the naked eye, it can become a fascinating and rewarding hobby for life.

'This is an excellent primer for any newcomer to astronomy and an enjoyable and readable book ... Every astronomer should have a copy. I shall stock it in my bookshop and heartily recommend it.' Paul England, Astronomy Now
'This book is well suited for novices to get acquainted with the stellar constellations, and for everyone interested in observing the sky with just the naked eye.' Orion (Societe Astronomique de Suisse)
'... the illustrations and details of what to look for at different times of year are very helpful for beginners ... this book excels at providing easy directions for exploring the night sky. Recommended for general readers.' M. K. Hemenway, Choice

Patrick Moore, host of the monthly television show The Sky at Night since 1957, is a distinguished and prolific author of more than 70 astronomy books. He has served as President of the British Astronomical Association. His contributions to the public understanding of astronomy have been marked by special awards from the Astronomical Society of the Pacific, the Italian Astronomical Society, and the Royal Astronomical Society. Patrick Moore is a great enthusiast, always encouraging anyone with an interest in the night sky to get out and observe.

GOR002829498
Stargazing: Astronomy without a Telescope by Patrick Moore
Patrick Moore
Used - Very Good
Paperback
Cambridge University Press
2000-10-16
216
0521794455
9780521794459
N/A
Book picture is for illustrative purposes only, actual binding, cover or edition may vary.
This is a used book - there is no escaping the fact it has been read by someone else and it will show signs of wear and previous use. Overall we expect it to be in very good condition, but if you are not entirely satisfied please get in touch with us.