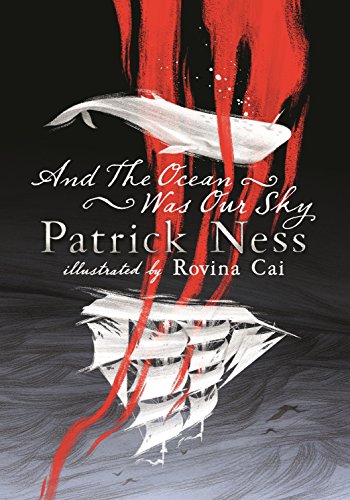 And the Ocean Was Our Sky
by Patrick Ness

And the Ocean Was Our Sky Summary

And the Ocean Was Our Sky by Patrick Ness

From the multi-award-winning author of A Monster Calls comes a haunting tale of power and obsession that turns the story of Moby Dick upside down.

"Call me Bathsheba." The whales of Bathsheba's pod live for the hunt. Led by the formidable Captain Alexandra, they fight a never-ending war against men. Then the whales attack a man ship, and instead of easy prey they find the trail of a myth, a monster, perhaps the devil himself... With their relentless Captain leading the chase, they embark on the final hunt, one that will forever change the worlds of whales and men.

And the Ocean Was Our Sky Reviews

Patrick Ness is the award-winning and bestselling author of the Chaos Walking trilogy, A Monster Calls, More Than This, The Rest of Us Just Live Here and Release. John Green has described him as "an insanely beautiful writer". He has won every major prize in children's fiction, including the Carnegie Medal twice. He has written the screenplay for the film of A Monster Calls and the BBC Doctor Who spin-off, Class. The first Chaos Walking film is slated for release in 2020. He lives in Los Angeles, USA.

Rovina Cai creates illustrations that evoke a sense of intrigue and she is often inspired by the past. From myths and fairy-tales to gothic novels, she loves stories that bring a little bit of magic and wonder to the present day. She lives in Melbourne, Australia.

GOR009266770
And the Ocean Was Our Sky by Patrick Ness
Patrick Ness
Used - Like New
Hardback
Walker Books Ltd
2018-09-01
160
1406383562
9781406383560
N/A
Book picture is for illustrative purposes only, actual binding, cover or edition may vary.
The book has been read, but looks new. The book cover has no visible wear, and the dust jacket is included if applicable. No missing or damaged pages, no tears, possible very minimal creasing, no underlining or highlighting of text, and no writing in the margins.