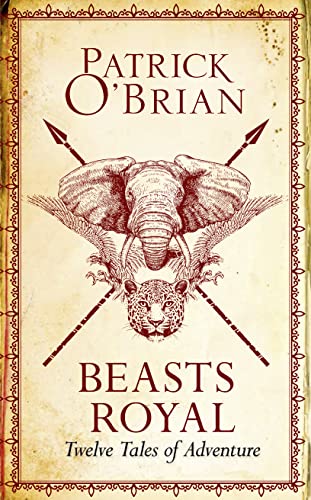 Beasts Royal is the second book written by Patrick O'Brian - made available, at last, for the first time since the 1930s and elegantly repackaged.

Beasts Royal is the second book written by Patrick O'Brian - made available, at last, for the first time since the 1930s and elegantly repackaged.

On the indigo waters of the South Sea, the crew of a schooner are attacked by a man-eating tiger-shark. In the humid depths of the African jungle, a thirty-foot python plots to rid himself of his rival, a wily old crocodile. Amid the heat and dust of the Punjab, the snake-charmer Hussein escapes into the forest on the elephant that he trained when a mahout in his youth.

With the dry wit and unsentimental precision O'Brian would come to be loved for, we see the drama and tragedies of the natural world unfold for these, as well as other birds and beasts, in these twelve tales of animal adventure that would appear together in 1934 as the author's second book.

O'Brian's debut, Caesar, had been published in 1930 and became an instant success, seeing him hailed as the `boy-Thoreau'. His second novel, Hussein, would expand upon one of the stories included in this collection and has been praised by Martin Booth of The Daily Telegraph as being `...as fresh today as when it was written....so rich in detail, it is breathtaking.' As with Caesar and Hussein, Beasts Royal sheds fascinating light on the formation of the literary genius behind the Aubrey-Maturin series of historical adventure tales, for which he is deservedly famous.

`Both books are full of the fantasy that has made O'Brian's seafaring yarns such a success. Like them, they are full of engaging adventures, curious lore, fond descriptions of food and scenes of battle... Caesar makes delightful, often hilarious reading... Hussein is more sophisticated. Here fully thirty years before Master and Commander was published is the unmistakable texture of O'Brian's historical fiction. Hussein has it all: the immersion in another world, full of local colour, the delight in a specialised vocabulary, the relish of male camaraderie, travel, treasure and fighting.'
David Sexton, Evening Standard

`O'Brian admirers can now appreciate another dimension to his writing' Alex O'Connell, The Times

GOR007039055
Beasts Royal: Twelve Tales of Adventure by Patrick O'Brian
Patrick O'Brian
Used - Very Good
Hardback
HarperCollins Publishers
2015-09-21
120
0008112940
9780008112943
N/A
Book picture is for illustrative purposes only, actual binding, cover or edition may vary.
This is a used book - there is no escaping the fact it has been read by someone else and it will show signs of wear and previous use. Overall we expect it to be in very good condition, but if you are not entirely satisfied please get in touch with us.