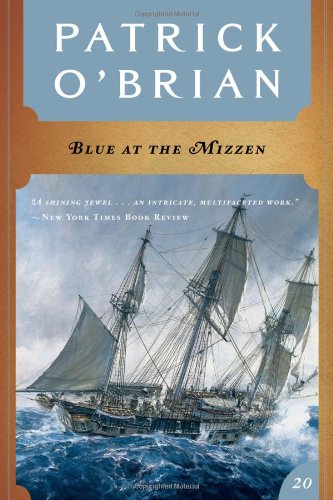 Blue at the Mizzen
by Patrick O'Brian

Used Price
$18.49
inc. GST
Free Shipping in Australia
"The old master has us again in the palm of his hand."-Los Angeles Times (a Best Book of 1999)
Reviews:
Trustpilot
Very Good

Blue at the Mizzen Summary

Blue at the Mizzen by Patrick O'Brian

Napoleon has been defeated at Waterloo, and the ensuing peace brings with it both the desertion of nearly half of Captain Aubrey's crew and the sudden dimming of Aubrey's career prospects in a peacetime navy. When the Surprise is nearly sunk on her way to South America-where Aubrey and Stephen Maturin are to help Chile assert her independence from Spain-the delay occasioned by repairs reaps a harvest of strange consequences. The South American expedition is a desperate affair; and in the end Jack's bold initiative to strike at the vastly superior Spanish fleet precipitates a spectacular naval action that will determine both Chile's fate and his own.

Customer Reviews - Blue at the Mizzen

Blue at the Mizzen Reviews

"I haven't read novels [in the past ten years] except for all of the Patrick O'Brian series. It was, unfortunately, like tripping on heroin. I started on those books and couldn't stop." -- E. O. Wilson - Boston Globe
"Filled with exuberance and humor, and a writer's palpable delight at exercising his finest muscles. . . . At sea with a master." -- San Francisco Chronicle
"O'Brian has presented his readers with a shining jewel...an intricate, multifaceted work." -- The New York Times Book Review
"The best historical novels ever written... On every page Mr. O'Brian reminds us with subtle artistry of the most important of all historical lessons: that times change but people don't, that the griefs and follies and victories of the men and women who were here before us are in fact the maps of our own lives." -- Richard Snow - New York Times Book Review
"It has been something of a shock to find myself-an inveterate reader of girl books-obsessed with Patrick O'Brian's Napoleonic-era historical novels... What keeps me hooked are the evolving relationships between Jack and Stephen and the women they love." -- Tamar Lewin - New York Times
"I devoured Patrick O'Brian's 20-volume masterpiece as if it had been so many tots of Jamaica grog." -- Christopher Hitchens - Slate
"I fell in love with his writing straightaway, at first with Master and Commander. It wasn't primarily the Nelson and Napoleonic period, more the human relationships... And of course having characters isolated in the middle of the goddamn sea gives more scope... It's about friendship, camaraderie. Jack Aubrey and Stephen Maturin always remind me a bit of Mick and me." -- Keith Richards
"[O'Brian's] Aubrey-Maturin series, 20 novels of the Royal Navy in the Napoleonic Wars, is a masterpiece. It will outlive most of today's putative literary gems as Sherlock Holmes has outlived Bulwer-Lytton, as Mark Twain has outlived Charles Reade." -- David Mamet - New York Times
"The Aubrey-Maturin series...far beyond any episodic chronicle, ebbs and flows with the timeless tide of character and the human heart." -- Ken Ringle - Washington Post
"O'Brian's Aubrey-Maturin volumes actually constitute a single 6,443-page novel, one that should have been on those lists of the greatest novels of the 20th century." -- George Will
"Gripping and vivid... a whole, solidly living world for the imagination to inhabit." -- A. S. Byatt
"There is not a writer alive whose work I value over his." -- Stephen Becker - Chicago Sun-Times
"Patrick O'Brian is unquestionably the Homer of the Napoleonic wars." -- James Hamilton-Paterson - New Republic

GOR002737157
Blue at the Mizzen by Patrick O'Brian
Patrick O'Brian
Aubrey/Maturin Novels
Used - Very Good
Paperback
Unknown
0
039332107X
9780393321074
N/A
Book picture is for illustrative purposes only, actual binding, cover or edition may vary.
This is a used book - there is no escaping the fact it has been read by someone else and it will show signs of wear and previous use. Overall we expect it to be in very good condition, but if you are not entirely satisfied please get in touch with us.