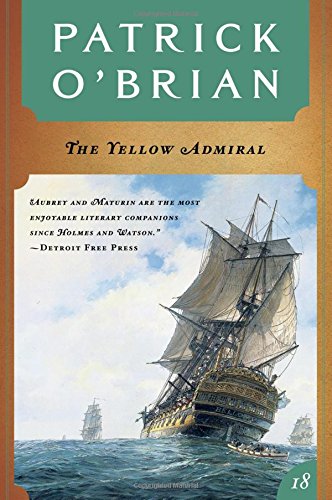 The Yellow Admiral
by Patrick O'Brian

The Yellow Admiral by Patrick O'Brian

Life ashore may once again be the undoing of Jack Aubrey in The Yellow Admiral, Patrick O'Brian's best-selling novel and eighteenth volume in the Aubrey/Maturin series. Aubrey, now a considerable though impoverished landowner, has dimmed his prospects at the Admiralty by his erratic voting as a Member of Parliament; he is feuding with his neighbor, a man with strong Navy connections who wants to enclose the common land between their estates; he is on even worse terms with his wife, Sophie, whose mother has ferreted out a most damaging trove of old personal letters. Even Jack's exploits at sea turn sour: in the storm waters off Brest he captures a French privateer laden with gold and ivory, but this at the expense of missing a signal and deserting his post. Worst of all, in the spring of 1814, peace breaks out, and this feeds into Jack's private fears for his career.

Fortunately, Jack is not left to his own devices. Stephen Maturin returns from a mission in France with the news that the Chileans, to secure their independence, require a navy, and the service of English officers. Jack is savoring this apparent reprieve for his career, as well as Sophie's forgiveness, when he receives an urgent dispatch ordering him to Gibraltar: Napoleon has escaped from Elba.

"The experience of reading O'Brian is that of gracious acceptance at one of the banquets of life's feast...It's hard not to find him irresistible." -- Commonweal
"O'Brian is at the top of his elegant form here...This is splendid storytelling from a true master." -- Publishers Weekly (starred review)
"I haven't read novels [in the past ten years] except for all of the Patrick O'Brian series. It was, unfortunately, like tripping on heroin. I started on those books and couldn't stop." -- E. O. Wilson - Boston Globe
"It has been something of a shock to find myself-an inveterate reader of girl books-obsessed with Patrick O'Brian's Napoleonic-era historical novels... What keeps me hooked are the evolving relationships between Jack and Stephen and the women they love." -- Tamar Lewin - New York Times
"Aubrey and Maturin are the most enjoyable literary companions since Holmes and Watson." -- Detroit Free Press
"If there were 17 more novels, I'd start today." -- Donald Graham - Wall Street Journal
"Taken as a whole, the Aubrey/Maturin novels are by a long shot the best things of their kind, so much better than the competition that comparisons long ago ceased to be relevant: they are uniquely excellent." -- New York Times Book Review
"The best historical novels ever written... On every page Mr. O'Brian reminds us with subtle artistry of the most important of all historical lessons: that times change but people don't, that the griefs and follies and victories of the men and women who were here before us are in fact the maps of our own lives." -- Richard Snow - New York Times Book Review
"I devoured Patrick O'Brian's 20-volume masterpiece as if it had been so many tots of Jamaica grog." -- Christopher Hitchens - Slate
"O'Brian's Aubrey-Maturin volumes actually constitute a single 6,443-page novel, one that should have been on those lists of the greatest novels of the 20th century." -- George Will
"Gripping and vivid... a whole, solidly living world for the imagination to inhabit." -- A. S. Byatt
"I fell in love with his writing straightaway, at first with Master and Commander. It wasn't primarily the Nelson and Napoleonic period, more the human relationships. ...And of course having characters isolated in the middle of the goddamn sea gives more scope. ...It's about friendship, camaraderie. Jack Aubrey and Stephen Maturin always remind me a bit of Mick and me." -- Keith Richards
"There is not a writer alive whose work I value over his." -- Stephen Becker - Chicago Sun-Times
"[O'Brian's] Aubrey-Maturin series, 20 novels of the Royal Navy in the Napoleonic Wars, is a masterpiece. It will outlive most of today's putative literary gems as Sherlock Holmes has outlived Bulwer-Lytton, as Mark Twain has outlived Charles Reade." -- David Mamet - New York Times
"Patrick O'Brian is unquestionably the Homer of the Napoleonic wars." -- James Hamilton-Paterson - New Republic
"The Aubrey-Maturin series... far beyond any episodic chronicle, ebbs and flows with the timeless tide of character and the human heart." -- Ken Ringle - Washington Post

GOR001989020
The Yellow Admiral by Patrick O'Brian
Patrick O'Brian
Aubrey/Maturin Novels
Used - Very Good
Paperback
WW Norton & Co
1997-09-15
320
0393317048
9780393317046
N/A
Book picture is for illustrative purposes only, actual binding, cover or edition may vary.
This is a used book - there is no escaping the fact it has been read by someone else and it will show signs of wear and previous use. Overall we expect it to be in very good condition, but if you are not entirely satisfied please get in touch with us.