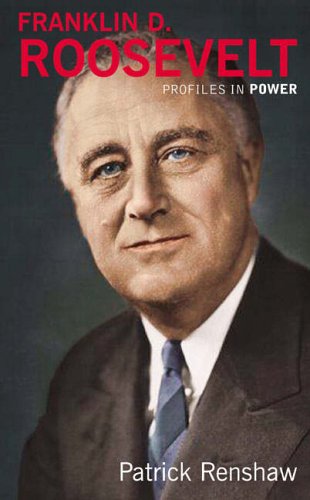 Out of Stock
$38.99
inc. GST
Professor Richard Carwardine, St Catherine's College, Oxford; calls this work, a fresh and vividly written account, of Franklin D.Roosevelt's life, covering his early days in one of the nation's oldest and richest families; the effect of the polio that ravaged him in his prime; and the role of his early political career and his 12-year presidency.
Well Read
Only 0 left

An important addition to the Profiles in Power series, this critical biography looks at Franklin D. Roosevelt, the most dominant US politician of the 1930s and 1940s. Roosevelt led the United States through the two great crises of depression and the Second World War, making him one of the key figures of the twentieth century.

'This book is more digestible that its numerous competitors and would work well on a 20th-century history survey course or in specialist modules dealing with the New Deal era.'

'... Patrick Renshaw's study, though equally succinct, is much more substantial... The book is consistently perceptive on FDR's use of power, and deftly interweaves the public and the private.'

Patrick Renshaw was as a journalist for seven years before a 30 year teaching career universities in Britain and America.

GOR010259071
Franklin D Roosevelt by Patrick Renshaw
Patrick Renshaw
Profiles In Power
Used - Well Read
Paperback
Taylor & Francis Ltd
2004-01-22
256
0582438039
9780582438033
N/A
Book picture is for illustrative purposes only, actual binding, cover or edition may vary.
This is a used book. We do our best to provide good quality books for you to read, but there is no escaping the fact that it has been owned and read by someone else previously. Therefore it will show signs of wear and may be an ex library book.