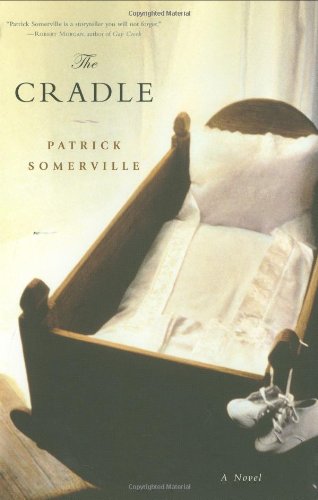 The Cradle
by Patrick Somerville

In Stock
$12.49
+10% GST
A beautiful debut novel from a remarkable young writer about marriage, devotion, and parenthood.
Very Good
Only 1 left

The Cradle by Patrick Somerville

In the summer of 1997, a newly wed couple, Matt and Marissa, are living in Wisconsin and expecting their first child. With the baby almost due, Marissa sends Matt on a quest to recover an antique cradle from her mother, who claimed it when she abandoned her family years earlier.

Ten years later, a middle-aged couple, Bill and Renee, are living outside Chicago and preparing to see their only son, Adam, off to war in Iraq. Adam's departure brings to the surface deeply personal memories of Renee's first love, and forces the confession of a long-held secret that brings the two stories together in the novel's powerful climax. Elegant and surprising, THE CRADLE tells a story that is warm, wise, and full of wonder.

"[A] magical debut novel...A deeply gratifying modern fable...with the light, graceful touch that makes Mr. Somerville, also the author of a short-story collection ("Trouble"), someone to watch. ..As a small novel with unexpectedly wide range, "The Cradle" mixes the profound emotional pull of parent-child connections with comically eccentric touches." -- New York Times "[A] lean, moving tale...'The Cradle' emerges swift and cinematic, an epic story told in a series of artfully curated, wonderfully rendered scenes...As a writer, I'm still wondering how Somerville created this exquisitely complex story on a small canvas. As a reader, I'm glad he did." -- New York Times Book Review "[A] surprisingly tender novel...What matters are Somerville's characters, rendered with such warm appreciation of their complexity and resilience that, although he declines to predict their future, we have every reason to hope they will continue making slow, tentative progress toward healing the wounds of the past." -- Chicago Tribune "The link between the characters...is uncovered with a slow grace. But the story's real centerpiece is Matt's rapport with Joe. Their spare conversation is beautifully written, with lines of painstaking clarity. The weight of what Matt is doing-speaking, in a way, to his younger self-manages gravity while dodging self-seriousness, a particular gift in a debut novel." -- Time Out Chicago "Somerville makes it clear that his title plot device is no mere MacGuffin but rather a sweetly drawn symbol that not only wraps up his debut novel with a neat bow but also communicates a wise and hopeful worldview... Somerville displays an effortless command over his fiction, letting secrets reveal themselves rather than dropping them in like surprise gimmicks. More important, as his knack for oddball secondary characters in overlooked pockets of the rust belt shows, Somerville concerns himself with people as much as plot." -- Chicago Reader "Poignant and funny...a well-wrought, often comical exploration of contemporary fatherhood." -- St. Louis Post-Dispatch "A heartwarming debut...a fast-paced, compassionate, moral book... the author succeeds beautifully in describing Matt's journey, which is both a harrowing road adventure and a journey of self-discovery." -- Minneapolis Star-Tribune "A fine first effort and a rewarding read." -- Hartford Courant "[Matt's] search, in Patrick Somerville's brilliant (and short!) debut novel is heartfelt, yes, but full of wild turns." -- Louisville Courier-Journal "This slim and rather unusual road novel is very satisfying... because [Somerville] manages to somehow pack a pretty epic family story into such a concentrated punch of a book, THE CRADLE is the kind of novel you can read in a single sitting on a rainy spring Sunday." -- Milwaukee Journal-Sentinel "Patrick Somerville's debut novel, "The Cradle," is a lovely, finely wrought tale of unlikely redemption. In prose that floats so lightly as to seem effortless, Somerville takes the reader on unlikely journeys that results in unexpected consequences..."The Cradle" is a slim volume, with prose that slides down easily - so easily that the emotions it explores can sneak up on the reader...The final pages of the novel are surprisingly satisfying and right. Somerville has many gifts, not the least of which is the ability to sketch his characters with firm strokes that leave no doubt as to their distinct and varied humanity. The resulting work is nothing short of a surprising treat." -- Denver Post "[A] marvelous debut...a road narrative that gradually accumulates the mythic echoes and dreamlike inevitability of allegory. Matt's search for the cradle takes on a picaresque nobility; he's like a blue-collar Odysseus, crisscrossing the Midwest in his quest to return home to his Penelope. What gives "The Cradle" its potent emotional resonance, however, is the way Somerville's prose calmly, relentlessly pulls at the Gothic skein of family tragedies that lurks behind the peeling paint and sagging porches, where a sense of inherited sin settles like a thick fog." -- Washington Post "[A] loving and surprising story." -- Milwaukee Journal-Sentinel "Well worth a reader's time and great stuff for book groups. The Cradle is a novel that comforts." -- St. Petersburg Times "A magical debut novel executed with grace and precision; there's not a wasted word in it." -- Chicago Sun-Times "Watch for it in December when reviewers start listing the year's best fiction...The Cradle is much stronger than a typical first book -- in fact, it is a more satisfying read than many a contemporary novel, period." -- Cleveland Plain Dealer "This meditative novel dignifies small gestures, which bring to life the compelling characters. A bonus is the fresh regional sensibility the author brings to Matt's road trip through the Northern Middle West states. Fresh turf for American fiction from a talented young writer." -- Kirkus "[A] spare, elegant first novel...Somerville's themes of a broader sense of interconnectivity and the resultant miracles of everyday existence retain their strength and affirm the value of forming and keeping families." -- Publishers Weekly "The stories alternate chapters and eventually come together in this satisfyingly sweet tale of love, commitment, and self-discovery. First novelist Somerville keeps us engaged in this slim novel from the outset. Though readers might guess the connections, they will want to see how the author provides the perfect denouement." -- Library Journal "With highly charged lyricism and dramatic concision, Somerville gracefully illuminates what children need, all that war demands, and how amends are made and sorrows are woven into the intricate tapestry of life." -- Booklist

Patrick Somerville grew up in Green Bay, Wisconsin, attended the University of Wisconsin-Madison, and later earned his MFA in creative writing from Cornell University.

GOR003244545
The Cradle by Patrick Somerville
Patrick Somerville
Used - Very Good
Hardback
Little, Brown & Company
2009-05-07
192
0316036129
9780316036122
N/A
Book picture is for illustrative purposes only, actual binding, cover or edition may vary.
This is a used book - there is no escaping the fact it has been read by someone else and it will show signs of wear and previous use. Overall we expect it to be in very good condition, but if you are not entirely satisfied please get in touch with us.