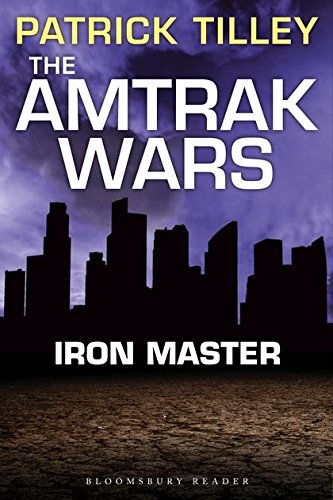 Hundreds of years after civilisation has been destroyed by nuclear war, the Earth is divided between the Trackers of the Amtrak Federation - a community living in vast subterranean cities - and the Mutes, who have evolved to withstand the radiation that has driven their foes underground. A long war for possession of the overground has killed and enslaved many of the Mutes, leaving only the Plainfolk to resist the Federation. And now the Iron Masters - a powerful people living in the traditions of the Samurai - have joined the struggle for dominance. Steve Brickman, a Tracker wingman who has formed a bond with the Plainfolk Mute clan M'Call, has become embroiled in a web of deceit, double bluffing, and lies. Now an agent of AMEXICO, a secret intelligence force of the Amtrak Federation, he has had to walk a fine line between his divided loyalties. Struggling to be true to his own people, Brickman strives to protect his one-time mentor Mr Snow, clan M'Call's magically gifted wordsmith, his Mute friend Cadillac, and the object of his desire, the beautiful Clearwater. Together, they all have a part to play in the Mute prophesy of Talisman, the one who will bring peace to the Earth, and turn the red world green once more. But now Cadillac and Clearwater have been kidnapped by the Iron Masters, a new threat in the power wars of the blue-sky world, and Brickman is determined to save them. With the psychic aid of his kin-sister Roz, and the help of the covert network of AMEXICO spies, he must infiltrate their closed and secretive society. Disguised as a Mute, travelling into the treacherous unknown, he must decide into whose hands to deliver his friends if he manages to save them; his AMEXICO handlers, who believe he is working for them? Or to Mr Snow, anxiously awaiting the return of his two disciples, the hope of the clan M'Call? Iron Master, first published in 1987, is the third instalment of Patrick Tilley's internationally best selling science fiction epic, The Amtrak Wars Saga.
Patrick Tilley was born in Essex in 1928, but spent his formative years in the border counties of Northumbria and Cumbria. After studying art at King's College, University of Durham, he came to London in 1955 and rapidly established himself as one of Britain's leading graphic designers. He began writing part-time in 1959. In 1968 he gave up design altogether in favour of a new career as a film scriptwriter. Work on several major British-based productions was followed by writing assignments in New York and Hollywood. His books have been translated into several languages, and have achieved cult-novel status.
NLS9781448213610
9781448213610
1448213614
The Amtrak Wars: Iron Master: The Talisman Prophecies Part 3 by Patrick Tilley
Patrick Tilley
New
Paperback
Bloomsbury Publishing PLC
2013-09-26
550
N/A
Book picture is for illustrative purposes only, actual binding, cover or edition may vary.
This is a new book - be the first to read this copy. With untouched pages and a perfect binding, your brand new copy is ready to be opened for the first time
Trustpilot