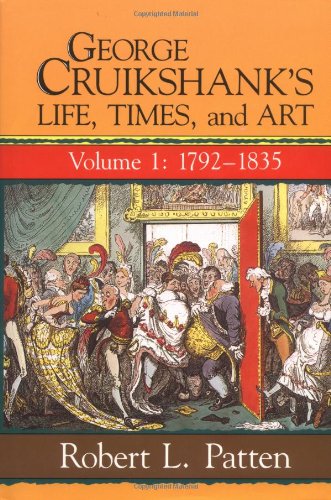 "Patten consistently manages with great deftness to intertwine the personal and the historical, the strands of Cruikshank's life and those of his caricatures, illustrations, and moralities without a sign of jargon or pedantry. . . . This is a monumental life and works."--Ronald Paulson, The Johns Hopkins University

"At last, an authoritative, exhaustively researched biography of one of nineteenth-century England's greatest popular artists! It will rescue him from the biographical obscurity in which he has dwelt and inspire a fresh estimate of his achievement as a rough-and-tumble caricaturist and prolific book illustrator."--Richard D. Altick, Ohio State University

The etchings and wood engravings by George Cruikshank (1792-1878) recorded, commented on, and satirized his times to such an extent that they have been frequently used to represent the age. Cruikshank, a popular artist in the propaganda war against Napoleon, an ardent campaigner for Reform and Temperance, and the foremost illustrator of such classics as Grimms' Fairy Tales, Scott's novels, and Dickens's Oliver Twist, is known for his versatility, imagination, humor, and incisive images. His long life, marked by a ceaseless struggle to win recognition for his art, intersected with many of Britain's important political, social, and cultural leaders.

Robert Patten provides the first documentary biography of Cruikshank. In this first volume of a two-volume work, which covers the artist's Regency caricatures and early book illustrations, Patten demonstrates the ways that Cruikshank was, as his contemporaries frequently declared, the Hogarth of the nineteenth century. Having reviewed over 8,500 unpublished letters and most of Cruikshank's 12,000 or more printed images, Patten gives a thorough and reliable account of the artist's career. He puts Cruikshank's achievement into a variety of larger contexts--publishing history, political and cultural history, the traditions of figurations practiced by Cruikshank's contemporaries, and the literary and social productions of nineteenth-century Britain.

Published to coincide with the Fall 1992 bicentennial celebrations of the artist's birth, this biography provides both the general reader and the specialist with a wealth of new information conveyed in a lively, non-technical prose. Patten's book contributes to current investigation of the rich interactions between high art and low art, texts and pictures, politics and imagination.

GOR010087465
George Cruikshank's Life Times & Art V1: vol. 1 by PATTEN
PATTEN
Used - Very Good
Hardback
Rutgers University Press
1991-12-15
495
081351813X
9780813518138
N/A
Book picture is for illustrative purposes only, actual binding, cover or edition may vary.
This is a used book - there is no escaping the fact it has been read by someone else and it will show signs of wear and previous use. Overall we expect it to be in very good condition, but if you are not entirely satisfied please get in touch with us.