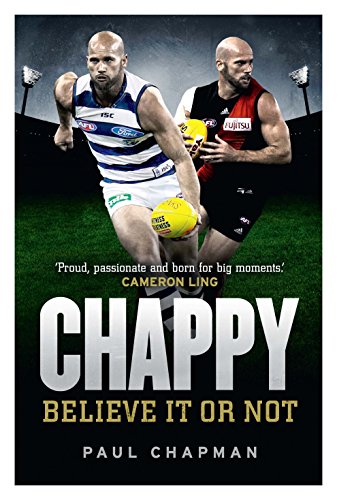 Chappie is a celebration of the career of much admired AFL footballer, Paul Chapman, and the highs and lows of two of the AFL's most revered clubs, Geelong and Essendon. Paul Chapman is one of the great players of AFL. Well known for always doing his best in a club (Geelong and then Essendon) both clubs have had their moments of high drama and Paul Chapman has been there.

Paul Chapman, well known for his honesty and forthrightness explores the highs and lows of football through three AFL premierships with Geelong and the turnover of coaches and star players; as well as an end of career experience of Essendon during its lowest ebb and again the extraordinary circumstances with ASADA leading to their change of coaches and an uncertain future for many of their players.

* Growing up and the tragic death of his brother and his last year in the TAC Cup
* Joining Geelong and the review at the end of 2006 when Mark Thompson was nearly replaced as coach.
* Speaking out in 2007 & the turnaround that sparked leading ultimately to the Grand Final win and nearly winning the Norm Smith Medal.
* The 2008 season & the unexpected loss to Hawthorn in the Grand Final that year
* Grand Final win in 2009 AND winning the Norm Smith Medal
* 2010 when Mark Thompson & Gary Ablett's relationship broke down culminating in being thrashed by Collingwood in the Preliminary Final in what was the last game at the Cats for both Ablett & Thompson
* Chris Scott & one hell of a great year in 2011 & another Premiership
* 2012 & 2013 - So close yet so far. Include in this his suspension for the 2013 preliminary final against Hawthorn which the Cats lost by less than a goal.
* Being Delisted by Geelong after 250 games and moving on
* Essendon and 2 more coaches and a team under the pump with the ASADA investigation and WADA appeal.

Paul Chapman joined Geelong in 1999, as National Draft pick 31. By 2002 he was in the seniors side along with players like Cameron Ling, Gary Ablett, Stevie Johnson, Jimmy Bartel. The coach was Bomber Thompson and the side was destined for glory. In 2006 Paul won Best and Fairest over Jimmy Bartel and Gary Ablett. 2007 and Geelong won their first premiership in 44 years, and did so again in 2009 and nearly winning in 2010 the year Paul was rewarded with an All Australian jumper. 2011 proved the winning streak was no fluke though and Geelong won again without Bomber Thompson or Ablett. Paul moved to Essendon at the end of 2013 a year that Geelong agin entered the finals. In 2014 Chappie became a popular figure at Essendon under senior coach Bomber Thompson and then in 2015 under James Hird. Jon Anderson is a senior writer at the Herald Sun and radio presenter for sport at 3AW. He has written three books in the past the most recent will be with Rodney Hogg, Speed Thrills.

GOR010757687
Chappy by Paul Chapman
Paul Chapman
Used - Very Good
Paperback
Hardie Grant Books
2015-11-01
300
1743791178
9781743791172
N/A
Book picture is for illustrative purposes only, actual binding, cover or edition may vary.
This is a used book - there is no escaping the fact it has been read by someone else and it will show signs of wear and previous use. Overall we expect it to be in very good condition, but if you are not entirely satisfied please get in touch with us.