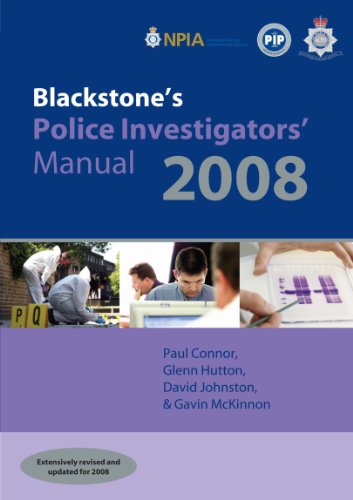 The Blackstone's Police Investigators' Manual 2007 is the only official study text (along with the Investigators' Workbook) 2008 for the National Investigators' Exam (NIE) which is taken as part of Phase 1 of the Initial Crime Investigators' Development Programme. Based on the bestselling Blackstone's Police Manuals, it provides legal information which is relevant to the role of a trainee investigator, namely in the areas of Property Offences, Assaults, Drugs, Firearms & Defences, Sexual Offences, Offences Against Children and Evidence. Now in it's sixth edition, this Manual is fully updated for the 2007/8 syllabus with reference to the 2007 Fraud Act and all recent legislative changes.

Fraser Sampson LLB, LLM, MBA is formerly a Superintendent and Head of National Police Training Examinations and Assessment. He is a solicitor in the Employment Group at Walker Morris, Leeds and Chief Executive of the Civil Nuclear Police Authority. Paul Connor LLB is a Police Training Consultant and is a member of the ICIDP Curriculum Review Group. He has previously been involved in training activities with the ICIDP and NIE. Paul is also the consultant editor for the Blackstone's Police Manuals and author of Blackstone's Police Investigators' Workbook, Blackstone's Police Investigators' Q&As and Blackstone's Sergeants' Mock Examination Paper. Glenn Hutton is private consultant to organizations concerned with recruitment and selection by way of assessment and examination. David Johnston is a barrister and operational Inspector in the Metropolitan Police Service. Gavin McKinnon LLB, LLM, MSc is Head of Secretariat at the National Policing Improvement Agency with responsibility for legal services, corporate governance, and equality and diversity. Formerly an officer in the RUC/PSNI and a Senior Civil Servant in the Home Office Police Reform Unit, he is an adjunct Professor of Law at the City University of New York. He has been published in legal and terrorism journals. In 2006 he was appointed to the Independent Monitoring Board for Brixton Prison by the Home Secretary.

GOR001629162
Blackstone's Police Investigators' Manual: 2008 by Paul Connor
Paul Connor
Used - Very Good
Paperback
Oxford University Press
2007-11-15
600
0199236801
9780199236800
N/A
Book picture is for illustrative purposes only, actual binding, cover or edition may vary.
This is a used book - there is no escaping the fact it has been read by someone else and it will show signs of wear and previous use. Overall we expect it to be in very good condition, but if you are not entirely satisfied please get in touch with us.