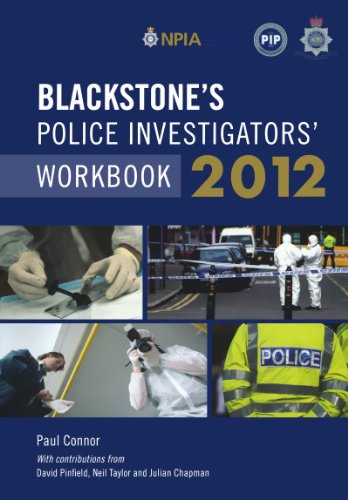 Out of Stock
$18.49
inc. GST
This is the only official study text, used alongside the Investigators' Manual 2012, for the National Investigators' Exam (NIE). Based on the bestselling Blackstone's Police Manuals, it provides all legal information relevant to the role of a trainee investigator.
Very Good
Only 0 left

The Blackstone's Police Investigators' Workbook 2012 is the official accompanying study text for the National Investigator's Exam (NIE) which is taken as part of Phase 1 of the Initial Crime Investigators' Development Programme. Based on the content of the Investigator's Manual, the book has been completely revised for the 2012 syllabus. It contains many practical exercises, case studies and multiple choice questions to help students prepare for the NIE. The Workbook takes the trainee investigator through each of the topics relevant to the examination, namely in the areas of Evidence; Property Offences; Assaults, Drugs, Firearms & Gun Crime; and Sexual Offences. The book also contains useful cross references to the Manual in the answers sections, so students can check their understanding of the content. This Workbook is completely up-to-date for the 2012 syllabus with reference to all recent legislative changes and case law, including the Crime and Security Act 2010, the Equality Act 2010, the Coroners and Justice Act 2009, the Policing and Crime Act 2009, and the Violent Crime Reduction Act 2006.

GOR005578949
Blackstone's Police Investigators' Workbook: 2012 by Paul Connor
Paul Connor
Used - Very Good
Paperback
Oxford University Press
2011-11-03
416
0199638942
9780199638949
N/A
Book picture is for illustrative purposes only, actual binding, cover or edition may vary.
This is a used book - there is no escaping the fact it has been read by someone else and it will show signs of wear and previous use. Overall we expect it to be in very good condition, but if you are not entirely satisfied please get in touch with us.