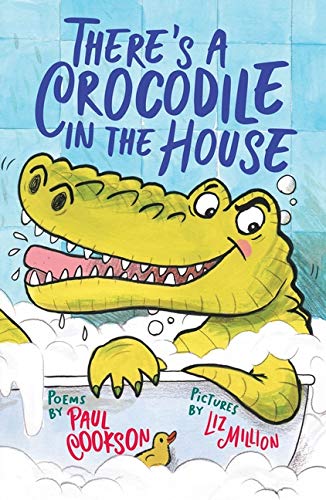 There's a Crocodile in the House by Paul Cookson

A favourite poet's new collection of verse for children, ranging from riotously funny to gently scary and outright absurd

There's a Crocodile in the House by Paul Cookson

Paul Cookson's staggeringly versatile range as a performance poet is fully displayed in this new collection. Humour, danger, wonder, surprise are the elements underlying his work. The collection contains some poems that need to be shouted and some that have to be whispered very quietly. There are many interactive poems in which a whole class or group of children can participate.

A great one to do with a high pitched "Beep Beep" and an extended quieter "Whoosh!"

Faster than the speed of sound

See it spinning round and round

Beaming down from way on high

Coming down for me and you

"A fabulous, laugh-out-loud collection: get it immediately!"

"Contains something for everyone: aliens, football, school trips and pirates! This collection has wide appeal, but would also be great for younger primary school children...packed with humour and contains handy performance tips."

"Perfect for use with little ones in the classroom."

"Surely this year's most hilarious and wacky collection of poems - from a celebrated poet-performer."

"A truly rib-tickling selection box filled with variety and fun."

"Absolutely perfect for a bit of audience participation and reading-aloud fun...A fun book that children will enjoy."

Paul Cookson has been visiting schools and festivals for 30 years now, performing his work and leading workshops.

This collection brings together many of his performance favourites for the first time. Like pantomime - but with better rhymes, Paul's shows are instantly memorable, always fun and the best time you can have in a school hall.

He is also Poet in Residence for The National Football Museum, Poet Laureate for Slade and was commissioned by Everton Football Club to write their season ticket poem "Home" - which can be seen as a video on Youtube etc.

Currently he is involved with Don Powell from Slade and songwriter Les Glover, where they are writing new material and performing as Don Powell's Occasional Flames

If he has any time left he reads lots of books, listens to music and plays one of his eight ukuleles. Not at the same time though. He's not that clever.

Liz Million is a crazy, lively Illustrator and Author of children's books and she likes to think that she has THE best job in world. When she isn't painting and writing books in her little studio in the North East, she spends a lot of time travelling the world talking to eager children in amazing schools, libraries and museums! Her favourite things to draw with children are cartoony animals and crazy creatures.

She graduated from Kingston upon Thames University in 1998 after her Illustration degree and was snapped up by a publisher straight away and she has been illustrating ever since.

Liz loves living in Darlington with her lovely husband, her crazy son, George and her cute Bedlington terrier, Peggy

GOR010576372
There's a Crocodile in the House by Paul Cookson
Paul Cookson
Used - Very Good
Paperback
Otter-Barry Books Ltd
2020-02-06
96
1913074005
9781913074005
N/A
Book picture is for illustrative purposes only, actual binding, cover or edition may vary.
This is a used book - there is no escaping the fact it has been read by someone else and it will show signs of wear and previous use. Overall we expect it to be in very good condition, but if you are not entirely satisfied please get in touch with us
Trustpilot