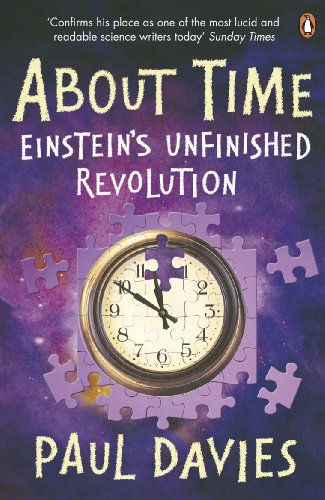 About Time
by Paul Davies

In Stock
$16.49
inc. GST
When Albert Einstein formulated his theory of relativity it brought about a revolution in our understanding of time, yet also presented a new set of mysteries. In this book, the author tackles the tough questions about time, including the strange relationship between physical time and our psychological perception of it.
Very Good Good Well Read
8 in stock

In About Time: Einstein's Unfinished Revolution Paul Davies confronts the puzzles and paradoxes of time that have bemused the world's greatest thinkers throughout the ages.

When Albert Einstein formulated his theory of relativity it brought about a revolution in our understanding of time, yet also presented a new set of mysteries. Einstein's time can be warped, leading to bizarre possibilities such as black holes and time travel, while making a nonsense of our perception of a 'now' or a division of time into past, present and future.

In About Time Paul Davies tackles the tough questions about time, including the strange relationship between physical time and our psychological perception of it. He gives straightforward descriptions of topics such as the theory of relativity, the relation between time dilation and the speed of light and Hawking's 'imaginary time'. He concludes that, despite decades of progress in unravelling the mysteries of time, the revolution is still underway...

'Intriguing and important ... a fascinating discussion of why Einstein's can't be the last word on the subject' - Independent on Sunday

'A tour of some of the most exciting - and outlandish - work in modern physics ... Writing with passion and wit, he lets his scientific message shine through' - New Statesman

Paul Davies is an internationally acclaimed physicist, writer and broadcaster, now based in South Australia. He is the author of some twenty award-winning books, including The Mind of God and The Fifth Miracle: The Search for the Origin of Life.

A very brief history of time; time for a change; timewarps; black holes - gateways to the end of time; the beginning of time - when exactly was it?; Einstein's greatest triumph?; quantum time; imaginary time; the arrow of time; backwards in time; time travel - fact or fantasy?; but what time is it now?; experimenting with time; the unfinished revolution.

GOR001338298
About Time: Einstein's Unfinished Revolution by Paul Davies
Paul Davies
Used - Very Good
Paperback
Penguin Books Ltd
1996-04-25
320
0140174613
9780140174618
N/A
Book picture is for illustrative purposes only, actual binding, cover or edition may vary.
This is a used book - there is no escaping the fact it has been read by someone else and it will show signs of wear and previous use. Overall we expect it to be in very good condition, but if you are not entirely satisfied please get in touch with us.