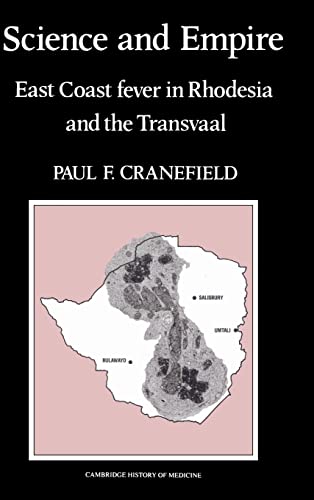 In Stock
$21.49
+10% GST
East Coast fever can kill 95% of a herd of cattle in three weeks. The disease was unknown to western science until it was introduced into Rhodesia in 1901. This book describes the social and economic impact, the scientific investigations into it, and the effort to control it.
Very Good
Only 1 left

East Coast fever is a lethal disease of cattle, caused by a parasite that multiplies within T-lymphocytes, causing them to become lymphoblasts that behave like cells in leukaemia and lymphoma. This is the story of the disease and its effects on farmers, as well as of the scientists who studied it. The disease was unknown to western science or to veterinary practice until it was introduced into Rhodesia in 1901. It devastated the cattle-raising and ox-cart dependent transport systems of Rhodesia and South Africa and was not fully brought under control for some 50 years. The book describes the social and economic impact of the outbreak, the scientific investigations into it, and the effort to control it. The scientific study of the disease was done in part by the famous bacteriologist Robert Koch, whose many early errors had a negative effect on later investigators whose work was far more sound.

"...an excellent means of assisting veterinarians and students of veterinary medicine in understanding the social and economic impact of animal diseases and how verterinary medicine is a key element in those aspects ... I found it fascinating and certainly gained insights into Koch's work that I did not learn as a studennt of bacteriology. Because the author wrote the book as a s tudy and a story, it makes great fireside or bedside reading." JVME
"Cranefield...has achieved a degree of clarity in his presentation of this story that should allow it to be readily understood by historians of the British Empire in Africa as well as by historians of medicine. Most laymen are unlikely to feel lost....Undoubtedly a highly reliable book, Science and Empire appears to have presented to its author an engrossing challenge to reconstruct past scientific reasoning and governance." Diana Wylie, International Journal of African Historical Studies
"...fascinating, well-written book....thoroughly grounded in research in relevant archives and the scientific literature. The author has many significant things to say about the process of scientific discovery, the role of intellectual authority, communications among researchers, and intellectual relationships between center and periphery. He also tells a very interesting and important story." K. David Patterson, Journal of the History of Medicine and Allied Science

List of illustrations; Preface; Acknowledgments; 1. Prologue; 2. The places and the players; 3. A new disease?; 4. The search for an expert; 5. Robert Koch in Bulawayo; 6. Joseph Chamberlain; 7. Arnold Theiler, Charles Lounsbury and Duncan Hutcheon; 8. The fight against East Coast fever; 9. The African-owned cattle in Rhodesia; 10. Two more parasites and another new disease; 11. What is East Coast fever?; 12. Epilogue; Notes and references; Index.

GOR010101963
Science and Empire: East Coast Fever in Rhodesia and the Transvaal by Paul F. Cranefield (Rockefeller University, New York)
Paul F. Cranefield (Rockefeller University, New York)
Cambridge Studies in the History of Medicine
Used - Very Good
Hardback
Cambridge University Press
1991-02-22
404
0521392535
9780521392532
N/A
Book picture is for illustrative purposes only, actual binding, cover or edition may vary.
This is a used book - there is no escaping the fact it has been read by someone else and it will show signs of wear and previous use. Overall we expect it to be in very good condition, but if you are not entirely satisfied please get in touch with us.