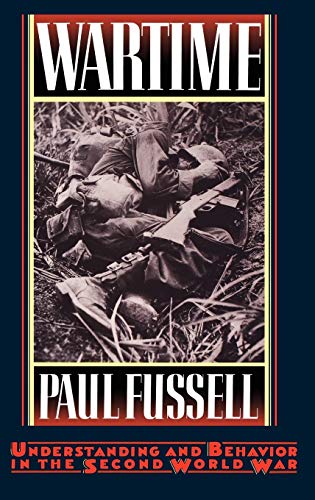 In Stock
$11.99
+10% GST
* Shuns the heroics portrayed by Hollywood * Fussell concentrates on the human factor in World War II * Examines the everyday life British and American people experienced on the home and battle fronts
Very Good Good
Only 4 left

Wartime: Understanding and Behavior in the Second World War by Paul Fussell

The Second World War has been romanticized almost beyond recognition by 'the sentimental, the loony patriotic, the ignorant, and the bloodthirsty.' In this readable and penetrating study, Paul Fussell goes behind the familiar diplomacy and heroics of history to examine the blunders, petty tyrannies, inconveniences, and deprivations that are many British and American people's memory of the War. There are lively sections on the role of drinking, tobacco, and sex in the war and on the home front; on propaganda; about writers and magazines who recorded the war or who attempted to keep aloft literary standards in a difficult time; on wartime slang and graphic recollections of the nightmare of combat. Written with a keen intelligence and deep emotion, Wartime is a worthy companion to Fussell's The Great War And Modern Memory , which won an American National Book Award and the National Critics Circle prize.

Paul Fussell is Professor of English at the University of Pennsylvania, and author of The Great War and Modern Memory (OUP 1975); Abroad (OUP 1982)

GOR001643492
Wartime: Understanding and Behavior in the Second World War by Paul Fussell
Paul Fussell
Used - Very Good
Hardback
Oxford University Press Inc
1989-01-01
350
0195037979
9780195037975
N/A
Book picture is for illustrative purposes only, actual binding, cover or edition may vary.
This is a used book - there is no escaping the fact it has been read by someone else and it will show signs of wear and previous use. Overall we expect it to be in very good condition, but if you are not entirely satisfied please get in touch with us.