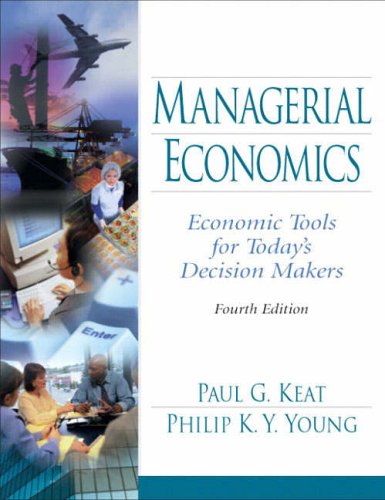 Out of Stock
$87.99
inc. GST
For upper-level undergraduate/graduate courses in Managerial Economics in departments of Economics and Finance. This distinctive text features a running case study at the beginning and end of each chapter that explores the decision-making processes of managers within a hypothetical company.
Very Good
Only 0 left

For upper-level undergraduate and first year MBA courses in Managerial Economics in departments of Economics and Finance.

This text features a running case study that explores the decision-making processes of managers within Global Foods, a hypothetical company. It creates a vivid, dynamic business setting that highlights microeconomic theory and the tools of quantitative analysis used in management decision-making. In addition, actual business examples from the popular press-including numerous international examples-are incorporated into the chapters to reinforce the connection between economics and real business situations.

Paul G. Keat has been a member of the Global Business Faculty at Thunderbird, The American Graduate School of International Management, for the past fifteen years. At present he is an Associate Professor Emeritus and Director of Research, CIBER Trade Assistance Service. Prior to his coming to Thunderbird he was for many years associated with the International Business Machines Corporation in professional and managerial capacities.

His education includes a B.B.A. in accounting from the Baruch School of the City University of New York, an M.A. from Washington University, and a Ph.D. in economics from the University of Chicago.

Dr. Keat began his IBM career in the department of economic research and then moved into the long-range planning area. Later, as a member of the finance function, he spent several years at IBM's European headquarters in Paris, as manager in the financial planning area, and then as the financial manager for the company's European software business. After his return to the United States, Dr. Keat served as manager in the pricing area of one of the company's manufacturing groups. Before leaving IBM, in 1987 he was associated with the company's International Finance, Planning and Administration School (IFPA), where he taught managerial economics, lectured on finance in a number of company-related courses, and managed academic courses. He also taught at IBM's IFPA school at La Hulpe, Belgium.

Dr. Keat has taught at several U.S. universities, including Washington University, CUNY, and Iona College. He was an adjunct professor of finance at the Lubin Graduate School of Business at Pace University, and he also taught in Pace's Executive MBA program.

Philip K.Y. Young is Clinical Professor of Management at Thunderbird, The American Graduate School of International Management. In this capacity, he conducts executive education programs for Thunderbird corporate clients throughout the world. Prior to this, he was Professor of Economics at the Lubin School of Business at Pace University. Dr. Young has over 20 years of experience developing and teaching in executive development programs. He served as the first visiting professor at the International Finance, Planning and Administration School of the IBM Corporation, where he developed and taught courses for IBM in both the United States and LaHulpe, Belgium.

Among the companies that currently utilize his teaching services are IBM, Verizon, British Telecom, SBC, ST Microelectronics, MasterCard International, Booz-Allen & Hamilton, and Dow Chemical. He teaches in executive programs for these and other companies in the United States, Latin America, Western and Central Europe, and Asia.

He has a B.A. from the University of Hawaii, a master's in international affairs from Columbia University, and a Ph.D. in economics from New York University.


7. The Theory and Estimation of Production.


8. The Theory and Estimation of Cost.


12. Economic Decision Making in the 21st Century: The "Old" Economics of the "New Economy."


15. Government and Industry: Challenges and Opportunities for Today's Managers.


16. Managerial Economics in Action: The Case of the Semiconductor Industry.

GOR010193828
Managerial Economics: Economic Tools for Todays Decision Makers: International Edition by Paul G. Keat
Paul G. Keat
Used - Very Good
Paperback
Pearson Education (US)
2002-07-01
765
0131105396
9780131105393
N/A
Book picture is for illustrative purposes only, actual binding, cover or edition may vary.
This is a used book - there is no escaping the fact it has been read by someone else and it will show signs of wear and previous use. Overall we expect it to be in very good condition, but if you are not entirely satisfied please get in touch with us.