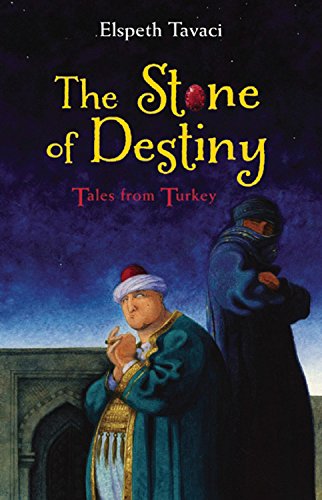 The Stone of Destiny
by Paul Hess

The Stone of Destiny Summary

The Stone of Destiny: Tales from Turkey by Paul Hess

For centuries, caravans of camels have travelled Turkey's Silk Roads piled high with exotic cargoes from India, Arabia and China. When a poor stonecutter called Salahaddin makes a miraculous find, he sets off on a perilous journey along the Silk Road to Istanbul and resorts to telling stories to stay alive. Brimming with scents, sounds and sinister merchants, this rich hoard of stories - including The Prince, the Nightingale and the Silent Princess, All for a Wrinkled Pomegranate, The Salt and The Golden Watermelons - is stylishly illustrated by Paul Hess and makes a sparkling introduction to a land still steeped in mystery.

Customer Reviews - The Stone of Destiny

The Stone of Destiny Reviews

"Our story begins one evening in June, when the sun sat like a huge orange ball suspended above the dark sea, spreading its pinky-orange glow over the little town of Trabzon. It was late, and soon the whole town would be blanketed by the soft bluey-blackness of a summer night."
-- from the book

ELSPETH TAVACI was born and brought up in Bradford, and took a Drama degree at the University of Wales. Moving to London, she worked backstage at the Theatre Royal, Drury Lane and then in advertising. Retraining as an English teacher, she took a job in Istanbul teaching English as a foreign language. She now works at Selt Publishing, where she writes English as a Foreign Language texts. She and her Turkish husband live in an apartment overlooking the Bosphorus and the old city . Paul Hess was born in Sydney, Australia, in 1961. He went to art college in Sydney and then worked as a graphic designer and Art Director for various companies both in Sydney and London from 1981 to 1991. He has worked as a freelance art director and illustrator since then. His books for Frances Lincoln are Death in a Nut, Nail Soup, Cow on the Roof, Dragon of Krakow, Hidden Tales from Eastern Europe, The King with Horse's Ears and The King and the Seed. He lives in Northumberland.

GOR004973634
The Stone of Destiny: Tales from Turkey by Paul Hess
Paul Hess
Used - Very Good
Paperback
Frances Lincoln Publishers Ltd
2012-05-03
144
1847802796
9781847802798
N/A
Book picture is for illustrative purposes only, actual binding, cover or edition may vary.
This is a used book - there is no escaping the fact it has been read by someone else and it will show signs of wear and previous use. Overall we expect it to be in very good condition, but if you are not entirely satisfied please get in touch with us.