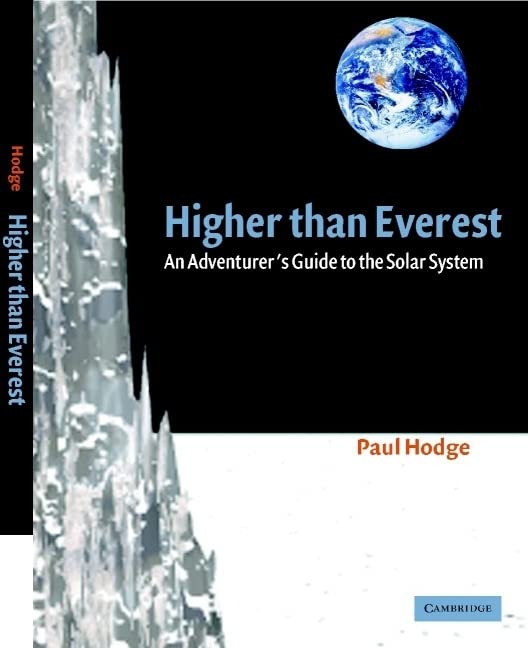 Higher than Everest
by Paul Hodge (University of Washington)

In Stock
$17.49
+10% GST
Few challenges remain for Earth-bound adventurers, but the Solar System abounds with weird and wonderful places to explore. In this unique guidebook, Paul Hodge takes us on a tour of the most spectacular sites in the Solar System, from mountains higher than Everest to canyons that dwarf the Grand Canyon.
Very Good
Only 1 left

Higher than Everest: An Adventurer's Guide to the Solar System by Paul Hodge (University of Washington)

Few challenges remain for Earth-bound adventurers, but do not fear - the Solar System abounds with weird and wonderful places to explore. In this unique guidebook, Paul Hodge takes us on a tour of the most spectacular sites in the Solar System. His vivid descriptions of the challenges provide a compelling introduction to extra-terrestrial environments. Starting with a climb of Mars' Mt. Olympus, much higher than Everest, you will be taken on imaginary expeditions to such exotic places as the Moon's Alpine Valley, Venus' precipitous and scorching Mt. Maxwell, a table mountain on Io, the snows of Saturn's rings and Miranda's incredibly high, icy cliff. You will be treated to a descent into a fabulous canyon on Mars, one that dwarfs the Earth's Grand Canyon, and will explore the rock lakes and terraces of Copernicus, a giant crater on the Moon. Who knows - one day these adventures may really be done!

'This book provides a spectacular tour of the most exciting surface features in the Solar system and achieves its objective brilliantly ... Paul Hodge has written an adventure story in a very factual and entertaining way, and this book deserves to be a bestseller.' Jerry Workman, Popular Astronomy
'Astronomers are explorers, a fact underlined by Paul Hodge in Higher than Everest ... Instead of bombarding the reader with facts and familiar images, Hodge encourages us to imagine ourselves out there actually climbing about on the surfaces of planets and moons. He takes his intrepid traveller on imaginary scrambles up the solar system's highest volcano (Olympus Mons, on Mars), dusty traverses of the lunar crater Galileo, and chilling dives under the deepest ice floes (on Saturn's moon Europea). Each adventure is hypothetically possible with modern technology. He compares cliff climbs on Jupiter's moon Miranda with the ascent of the Eigerwand in Switzerland. He stresses the similarities between South Africa's Drakensberg mountains and Io's Mount Euboea. And throughout he emphasises the beauty and the thrill of what's still out there to be discovered.' New Scientist
'Let astronomer Paul Hodge take you on an imaginary tour of the most spectacular sites in the Solar System ... you will have your breath taken away, without even leaving your home.' Europe & Astronomy
'This book is a sound exposition of the physical features of the different planets and their peculiarities, and deals with each landscape (and space vista) as if you really can trek through it ... It is great fun, especially for the more ambitious armchair explorers. Hodge has refined this approach through teaching and as an excursion guide it could enliven many a class in planetary geology.' Astronomy & Geophysics
'... a light-hearted adventurer's guide to our planet's immediate neighbourhood ... will appeal to armchiar alpinists everywhere ...'. Nature
'As a concise explorer's travel guide to the wonders of the Solar system, the book successfully stimulates the imagination by providing fascinating insights into each planetary or lunar environment.' Peter Bond, Astronomy Now
'... a compelling introduction to extra-terrestrial environments ... well illustrated and reasonably priced - recommended.' Richard Taylor, Spaceflight
"Higher Than Everest is the kind of book that will appeal to armchair alpinists everywhere, and one that sets the standard for twenty-second-century aficionados of extreme sports....Compared with Mars, journeys to the outer Solar System are technically challenging and fraught with uncertainty. But despite this, Hodge leaves the reader feeling that one day they might just happen....the scope of this study is impressive, and this well-researched book deserves a place on the bookshelf of anyone interested in the Solar System and its origins." Nature, Jan. 2002
"There are amny good introductory books available for understanding comparative planetology. Higher Than Everest is one of them. This volume is a well-written, enjoyable, and innovative treatment of basic facts about the bodies in the solar system, presented in a fashion somewhat different from the normal treatment of the topic." Science Books & Films
"Higher than Everest is a fun idea well executed and full of fascinating tidbits that will leave you wishing you could go to these exotic locations tomorrow!" TPO
"Paul Hodge...has produced a rare phenomenon...a book about science that is incisive and completely fun." Asheville Citizen-Times

About Paul Hodge (University of Washington)

Paul Hodge is Professor of Astronomy at the University of Washington and Editor in Chief of the Astronomical Journal. For many years he has taught a popular undergraduate course on the planets, from which this book originated.

Preface; 1. Higher than Everest; 2. Higher than that? - Other high peaks of Mars; 3. Descent into the Martian deep; 4. The cliffs of coprates; 5. A polar crossing; 6. The other Alps - climbing Mt. Blanc; 7. Pico peak - Monadnock of the moon; 8. The great Copernicus traverse; 9. Maxwell, mountains of mystery; 10. Volcanoes of Venus; 11. The cliff of discovery; 12. Descent into the maelstrom; 13. An Ionian adventure; 14. Mountain climbing in pizzaland; 15. Under the frozen sea; 16. Snowboarding through Saturn's rings; 17. Titan's tarry seas; 18. Climbing the cliff of Miranda; 19. The Yellowstone of the solar system; 20. All nine.

GOR001949953
Higher than Everest: An Adventurer's Guide to the Solar System by Paul Hodge (University of Washington)
Paul Hodge (University of Washington)
Used - Very Good
Hardback
Cambridge University Press
2001-08-02
256
0521651336
9780521651332
N/A
Book picture is for illustrative purposes only, actual binding, cover or edition may vary.
This is a used book - there is no escaping the fact it has been read by someone else and it will show signs of wear and previous use. Overall we expect it to be in very good condition, but if you are not entirely satisfied please get in touch with us.