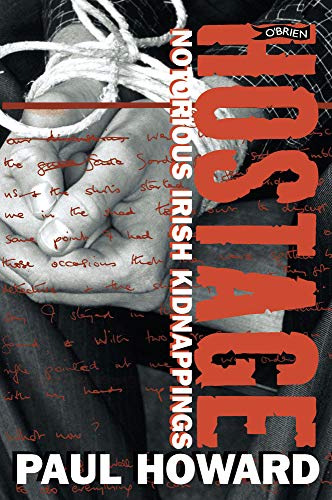 The inside stories of Ireland's most famous abduction cases.

The inside stories of Ireland's most famous abduction cases.

In the late 1970s and early 1980s Ireland was hit by a spate of high-profile kidnappings: Lord and Lady Donoughmore, Belfast-based German industrialist Thomas Niedermayer, Ferenka chief Dr Tiede Herrema, supermarket heir Ben Dunne, Quinnsworth's Don Tidey, and, bizarrely, the Aga Khan-owned Epson Derby-winner Shergar. The kidnappings had one thing in common -- they were all the work of paramilitary forces, carried out either as fund-raising efforts or for use as leverage to force the release of IRA prisoners.

Hostage sheds new light on the Monasterevin siege, the ransom deals, the ordeals of the hostages, and how they were all rescued, except for Thomas Niedermayer, who, tragically, died, and Shergar, whose disappearance remains a mystery. It tells for the first time how the team was assembled to abduct billionaire Galen Weston, and why it all went wrong. Based on interviews with negotiators, hostages, gardai and IRA sources, and the diary of one of the victims, Hostage reveals never-before-published details of these terrifying crimes.

Paul Howard helps Ross O'Carroll-Kelly to write his autobiographical series, largely because Ross can't really write, roysh? Find out more at rossocarrollkelly.com. He is also the author of the bestselling prison expose, The Joy, and co-author of Celtic Warrior, the autobiography of boxer Steve Collins. A former Sports Journalist of the Year, Paul covered the World Cup in Japan and Korea in 2002, and the rugby World Cup in Australia in 2003. His account of the Irish soccer squad and the notorious drama in Saipan, The Gaffers: Mick McCarthy, Roy Keane and the Team they Built, was a bestseller. Paul has also written several massively popular plays and has won the popular fiction prize at the Irish Book Awards three times for books in the Ross O'Carroll-Kelly series.
GOR002645734
9780862787691
0862787696
Hostage: Notorious Irish Kidnappings by Paul Howard
Paul Howard
Used - Very Good
Paperback
O'Brien Press Ltd
2004-03-23
264
N/A
Book picture is for illustrative purposes only, actual binding, cover or edition may vary.
This is a used book - there is no escaping the fact it has been read by someone else and it will show signs of wear and previous use. Overall we expect it to be in very good condition, but if you are not entirely satisfied please get in touch with us
Trustpilot