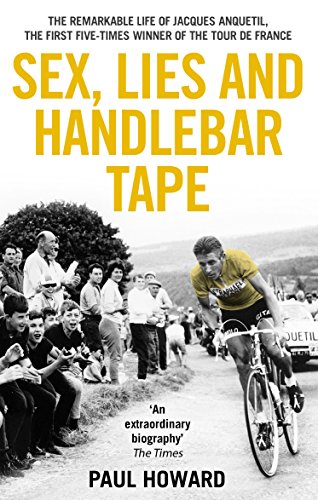 For the first time since his death in 1987, it reveals the extraordinary truth behind the legend, the man and the cyclist.

His list of 'firsts' alone makes him worthy of a place in the cycling pantheon: the first man to win the Tour de France five times;

Sex, Lies and Handlebar Tape: The Remarkable Life of Jacques Anquetil, the First Five-Times Winner of the Tour de France by Paul Howard

Sex, Lies and Handlebar Tape is the astonishing biography of French cycling star Jacques Anquetil. For the first time since his death in 1987, it reveals the extraordinary truth behind the legend, the man and the cyclist.

However, the extraordinary life of Anquetil does not stop at his achievements on a bike. He candidly admitted to using drugs, offended legions of fans by confessing that his only motivation for riding was financial and infamously indulged his enthusiasm for the high life. He also seduced and married his doctor's wife, had a child with her daughter and then sustained a menage a trois with both wife and stepdaughter under the same roof for 12 years. When this 'family' eventually imploded, he attempted to inspire jealousy in his former lovers by having a child with his stepson's ex-wife.

An extraordinary biography * The Times Magazine *
Paul Howard has not allowed Anquetil's astonishing love life to overwhelm his equally extraordinary career . . . an impeccably researched book (Book of the Week) * Independent on Sunday *
An excellent work * Daily Telegraph *
A stunning story * Shortlist *
Paul Howard is a writer who contributes frequently to cycling magazines and the national press. His first book, Riding High, was shortlisted for the National Sporting Club's Best New Sports Writer prize. He is also the author of Two Wheels on my Wagon.
GOR007709185
9781910948002
1910948004
Sex, Lies and Handlebar Tape: The Remarkable Life of Jacques Anquetil, the First Five-Times Winner of the Tour de France by Paul Howard
Paul Howard
Used - Very Good
Paperback
Transworld Publishers Ltd
2015-07-02
336
N/A
Book picture is for illustrative purposes only, actual binding, cover or edition may vary.
This is a used book - there is no escaping the fact it has been read by someone else and it will show signs of wear and previous use. Overall we expect it to be in very good condition, but if you are not entirely satisfied please get in touch with us
Trustpilot