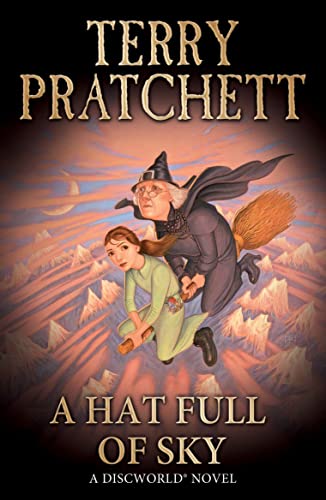 A Hat Full of Sky
by Paul Kidby

Used Price
$16.99
inc. GST
Free Shipping in Australia
THE SECOND BOOK IN THE TIFFANY ACHING SERIESSomething is coming after Tiffany. Tiffany Aching is ready to begin her apprenticeship in magic, but life isn't exactly what she thought it would be. In the end, it will take all of Tiffany's inner strength to save herself.
Reviews:
Trustpilot
Like New Very Good Good Well Read

A Hat Full of Sky Summary

A Hat Full of Sky: (Discworld Novel 32) by Paul Kidby

THE SECOND BOOK IN THE TIFFANY ACHING SERIES Something is coming after Tiffany. . . Tiffany Aching is ready to begin her apprenticeship in magic, but life isn't exactly what she thought it would be. She expects spells and magic - not chores and ill-tempered goats! Surely there must be more to witchcraft than this? And Tiffany will find that she needs her magic more than ever, to fight off the insidious, disembodied creature that is pursuing her. This time, neither Mistress Weatherwax (the greatest witch in the world) nor the fierce, six-inch-high Wee Free Men can protect her. In the end, it will take all of Tiffany's inner strength to save herself. Will she succeed?

A Hat Full of Sky Reviews

"Pratchett's ear for dialogue is superb . . . His deep feeling for landscape, animals, kindness and courage make his adventures deeply satisfying as well as clever" * The Times *
"Oodles of dry wit, imagination and shrewdly observed characters" * Independent on Sunday *
"A great Pratchett strength is the sense that if the jokes . . . were dropped there would still be a good, engaging fantasy thriller here" * Independent *
"Fantastically inventive and humorous fantasy adventure. Fans will be sky high" * The Sunday Times *
"Funny, typically humorous . . . A must for any Terry Pratchett fan . . . With its witty and slightly confusing plot-twists and hilarious dialogue, this is, without doubt, another great children's book" * Bristol Evening Post *

Terry Pratchett (Author) Terry Pratchett was the acclaimed creator of the global bestselling Discworld series, the first of which, The Colour of Magic, was published in 1983. In all, he was the author of over fifty bestselling books. His novels have been widely adapted for stage and screen, and he was the winner of multiple prizes, including the Carnegie Medal, as well as being awarded a knighthood for services to literature. He died in March 2015. terrypratchett.co.uk Paul Kidby (Illustrator) Paul Kidby is thirty-four and lives behind an easel in Dorset. He is best-known for his illustrations of Discworld and its inhabitants in The Pratchett Portfolio, The Discworld Diaries, The Tourist Guide to Lancre and his prints and greeting cards.

GOR008821505
A Hat Full of Sky: (Discworld Novel 32) by Paul Kidby
Paul Kidby
Discworld Novels
Used - Like New
Paperback
Random House Children's Publishers UK
2005-05-02
352
0552551449
9780552551441
N/A
Book picture is for illustrative purposes only, actual binding, cover or edition may vary.
The book has been read, but looks new. The book cover has no visible wear, and the dust jacket is included if applicable. No missing or damaged pages, no tears, possible very minimal creasing, no underlining or highlighting of text, and no writing in the margins.