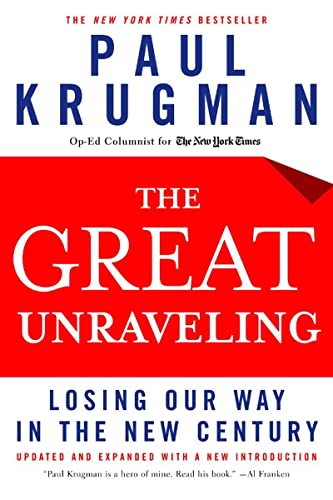 The Great Unraveling: Losing Our Way in the New Century by Paul R. Krugman

No one has more authority to call the shots the way they really are than award-winning economist Paul Krugman, whose provocative New York Times columns are keenly followed by millions. One of the world's most respected economists, Krugman has been named America's most important columnist by the Washington Monthly and columnist of the year by Editor and Publisher magazine.

A major bestseller, this influential and wide-ranging book has been praised by BusinessWeek as Krugman's "most provocative and compelling effort yet," the New York Review of Books as "refreshing," and Library Journal as "thought-provoking...even funny." The American Prospect put it in vivid terms: "In a time when too few tell it like it is...[Krugman] has taken on the battle of our time."

Built from Paul Krugman's influential Op-Ed columns for the New York Times, this book galvanized the reading public. With wit, passion, and a unique ability to explain complex issues in plain English, Krugman describes how the nation has been misled by a dishonest administration.

In this long-awaited work containing Krugman's most influential columns along with new commentary, he chronicles how the boom economy unraveled: how exuberance gave way to pessimism, how the age of corporate heroes gave way to corporate scandals, how fiscal responsibility collapsed. From his account of the secret history of the California energy crisis to his devastating dissections of dishonesty in the Bush administration, from the war in Iraq to the looting of California to the false pretenses used to sell an economic policy that benefits only a small elite, Krugman tells the uncomfortable truth like no one else. And he gives us the road map we will need to follow if we are to get the country back on track.

The paperback edition features a new introduction as well as new writings.

"A rigorously argued, angrily eloquent, fiercely patriotic book." -- Boston Sunday Globe
"Paul Krugman is the indispensable American columnist, a voice of truth in a political world of lies and calculated injustice. This book is even better. It makes the case, unrestrained by deference, that a revolutionary right-wing movement is out to transform the United States-and is succeeding, rolling over a supine press and political opposition." -- Anthony Lewis
"Paul Krugman is the great discovery of recent American journalism. Lively, lucid, witty, superbly informed, his commentary on the state of the union is required reading for anyone concerned about the American future." -- Arthur M. Schlesinger, Jr.
"The title of Paul Krugman's The Great Unraveling might well have been The Great Usurpation. In a republic hijacked by the radical right whose leaders reject the legitimacy of our current political system, Paul Krugman's coruscant book calls for a "great revulsion" across the land before it is too late." -- David Levering Lewis, author of W.E.B. DuBois: Biography of a Race
"If I had a tenth of Paul Krugman's brain and a twentieth of his courage, I'd be the happiest person on the face of the Earth." -- James Carville
"The new Krugman book documents why this top-drawer academic economist deserves at least one Pulitzer Prize for his accurate Times op-ed columns that are a lone voice, telling things as they are and debunking Washington policies that are neither compassionate nor conservative. Plutocratic democracy is in the saddle. Rx. Krugman twice a week and in this coherent sum-up on relevant 2003-2010 economics. Buy. Read. Ponder. Benefit." -- Paul A. Samuelson, Institute Professor Emeritus, Massachusetts Institute of Technology

Paul Krugman, recipient of the 2008 Nobel Prize in Economics and best-selling author, has been a columnist at The New York Times for twenty years. A Distinguished Professor at City University of New York, he resides in New York City.

GOR001405489
The Great Unraveling: Losing Our Way in the New Century by Paul R. Krugman
Paul R. Krugman
Used - Very Good
Paperback
WW Norton & Co
2004-08-17
464
0393326055
9780393326055
N/A
Book picture is for illustrative purposes only, actual binding, cover or edition may vary.
This is a used book - there is no escaping the fact it has been read by someone else and it will show signs of wear and previous use. Overall we expect it to be in very good condition, but if you are not entirely satisfied please get in touch with us.