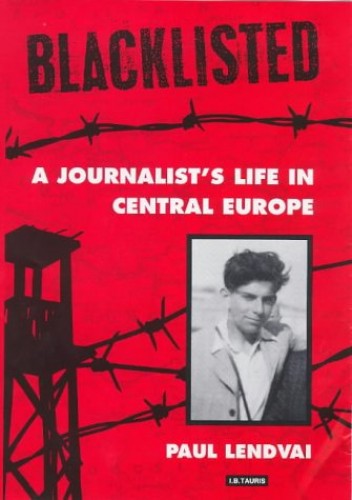 Used Price
$23.99
inc. GST
Free Shipping in Australia
A memoir by Paul Lendvai, a Hungarian Jew who was arrested by the Nazis as a teenager. He became a communist activist in post-war Budapest, was imprisoned by the communists, and fled to Vienna after the 1956 Revolution. He became a leading journalist and commentator on eastern Europe.
Reviews:
Trustpilot
Very Good

Blacklisted: A Journalist's Life in Central Europe by Paul Lendvai

Paul Lendvai, born a Hungarian Jew, was arrested by the Nazis as a teenager, became a young communist activist in post-war Budapest, was arrested by the communists, again survived as one of the country's youngest political prisoners, and on his release was blacklisted as a journalist by the communist regime. After fleeing to Vienna following the 1956 Revolution, Lendvai was to become a leading journalist and commentator on eastern Europe. In this prize-winning memoir, he paints a picture of ethnic hatred, political turbulence and murderous anti-Semitism, as well as the swings between treachery and compromise which have characterized the history of 20th-century central Europe. There are descriptions of encounters with killers, torturers, onlookers and victims, traitors and heroes. In preparing the book, Lendvai had access to many previously unseen secret police files of Czechoslovakia, East Germany and Hungary.

Paul Lendvai was for 22 years a Financial Times correspondent and later became Editor in Chief of ORF, the Austrian Broadcasting Corporation.

Prologue: in the cell - facing the camera. Part 1 The heights and depths of youth: farewell to the "Golden Era"; the road to Purgatory; from Stefan Zweig to Lenin; left-wing socialist illusions; suspicion, fear and show trials; terror and grim humour; my friend the informer; the lost years of a non-person; from crescendo to furioso - October to december 1956; the road to freedom. Part 2 Witness to the cold war: new beginning in Vienna - the birth of Gorgy Hollo, Arpad Becs and Paul Landy, the Financial Times as flagship; the power of striptease; new relations with the east - first return to Budapest; encounters with the Stasi and other services; nationalism and anti-semitism under Communist rule; Bruno Kreisky - orator and communicator. Part 3 An epoch ends: blacklisted; riling the Eastern Bloc; the Waldheim affair; a new lease of life - the past is never dead.

GOR001286340
Blacklisted: A Journalist's Life in Central Europe by Paul Lendvai
Paul Lendvai
Used - Very Good
Hardback
I.B. Tauris & Co. Ltd.
1998-12-31
256
1860642683
9781860642685
N/A
Book picture is for illustrative purposes only, actual binding, cover or edition may vary.
This is a used book - there is no escaping the fact it has been read by someone else and it will show signs of wear and previous use. Overall we expect it to be in very good condition, but if you are not entirely satisfied please get in touch with us.