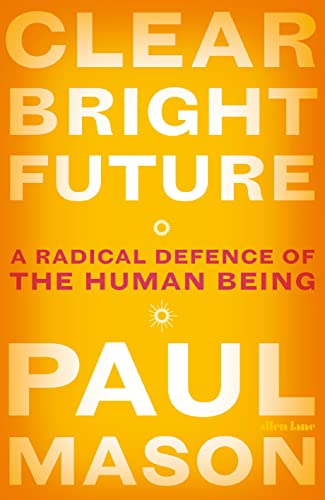 Clear Bright Future: A Radical Defence of the Human Being by Paul Mason

How do we preserve what makes us human in an age of uncertainty? Are we now just consumers shaped by market forces? A sequence of DNA? A collection of base instincts? Or will we soon be supplanted by algorithms and A.I. anyway?

In Clear Bright Future, Paul Mason calls for a radical, impassioned defence of the human being, our universal rights and freedoms and our power to change the world around us. Ranging from economics to Big Data, from neuroscience to the culture wars, he draws from his on-the-ground reporting from mass protests in Istanbul to riots in Washington, as well as his own childhood in an English mining community, to show how the notion of humanity has become eroded as never before.

In this book Paul Mason argues that we are still capable - through language, innovation and co-operation - of shaping our future. He offers a vision of humans as more than puppets, customers or cogs in a machine. This work of radical optimism asks: Do you want to be controlled? Or do you want something better?

It has quick wit, vivid prose and makes rapid and stimulating connections. Its subtitle sums up its strengths. Fundamentally, Mason believes in the power of agency - the ability to choose to act and shape your own future. -- John McTernan * Financial Times *
A very interesting book, wide-ranging, insightful and yet still optimistic...some of his glosses on the history of ideas, and their impact on our troubled present, are alone worth the price of the book: he explains, lucidly and persuasively, how the uncertainty principles of quantum mechanics - questionable in themselves - have bled, via post-modernist theory, into the climate of irrationalism and fatalism that fuels Brexit, Putin and Trump. -- Ed O'Loughin * Irish Times *
Clear Bright Future's account of our political predicament is thrilling. -- Eliane Glaser * Guardian *
Paul Mason is doing something remarkable in this book, though it shouldn't be remarkable: he's focusing on the nature of being human, and how this is affected for better or worse by social, economic, and political forces that might seem overwhelming. It's the best analysis of neo-liberalism that I've seen for a long time, and puts our lives in a richly described context. Best of all, it's written with clarity and passion. I hope it'll change many minds. -- Philip Pullman
Amid the ruins of many modern ideologies, Paul Mason's consistently bracing book offers a guide to a sustainable future - one that we can still shape with a fresh transformational vision of what it means to be free human being. Everyone should read it. -- Pankaj Mishra
An unshakable humanist faith runs through this book... with his humane stress on the good life, Mason defies the caricature of the Corbyn left as reheated Soviet Communism. Corbynism is also routinely charged with wanting to "take us back to the 1970s." But here its leading thinker engages with tomorrow's economy with an urgency that's not currently matched on the right. -- Tom Clark * Prospect *

Paul Mason is an award-winning writer, broadcaster, and film-maker. Previously economics editor of Channel 4 News, his books include PostCapitalism, Why It's Kicking Off Everywhere: the New Global Revolutions; Live Working Die Fighting; and Rare Earth: A Novel.

GOR009782136
Clear Bright Future: A Radical Defence of the Human Being by Paul Mason
Paul Mason
Used - Like New
Hardback
Penguin Books Ltd
2019-05-02
368
0241320100
9780241320105
N/A
Book picture is for illustrative purposes only, actual binding, cover or edition may vary.
The book has been read, but looks new. The book cover has no visible wear, and the dust jacket is included if applicable. No missing or damaged pages, no tears, possible very minimal creasing, no underlining or highlighting of text, and no writing in the margins.