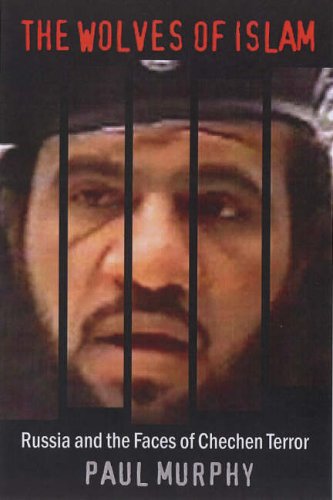 Wolves of Islam
by Paul Murphy

Wolves of Islam by Paul Murphy

At a little past 9:00 p.m., on October 23, 2002, nineteen young women and twenty-two men bounded from minivans and sprinted through the front doors of the sprawling Dubrovka Theater Center in Moscow. Once inside, the troop hurriedly changed into their costumes and, following a well-rehearsed script, took their designated places for the evening's dramatic finale. These people were not, however, actresses and actors starring in the hit musical Nord Ost, which was entertaining a sellout crowd of 711 spectators in the concert hall. They were Chechen Islamic terrorists-suicide hostage-takers who had come to Moscow to die and take their audience prey with them, unless the Russians immediately withdrew from Chechnya.

The Dubrovka theater siege ushered in a new hostile escalation in the fanatical Islamist Chechens' ten-year fight against the Russian state. The "wolves of Islam" have adopted terror with maximum civilian casualties as its strategic weapon of choice, are employing the Palestinian model of suicide terror against civilians, and may be plotting with al Qaeda to conduct international terrorist operations abroad.

In Wolves of Islam Paul Murphy tells the story of the principal cast of characters. To drive Russia out of the North Caucasus, Chechen terrorists carry out horrific acts of unimaginable terror. Individually and collectively, they have led Chechnya down the road to chaos, political anarchy, economic ruin, and physical destruction, as they continue to prosecute their Islamic holy war.

GOR004759023
Wolves of Islam by Paul Murphy
Paul Murphy
Used - Very Good
Paperback
Potomac Books Inc
2005-12-30
282
1574888315
9781574888317
N/A
Book picture is for illustrative purposes only, actual binding, cover or edition may vary.
This is a used book - there is no escaping the fact it has been read by someone else and it will show signs of wear and previous use. Overall we expect it to be in very good condition, but if you are not entirely satisfied please get in touch with us.