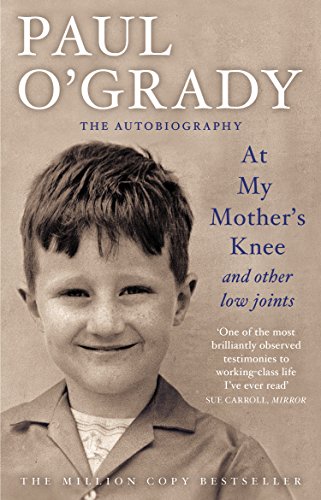 At My Mother's Knee...
by Paul O'Grady

In Stock
$15.49
inc. GST
A story of the author's early life in Irish Catholic Birkenhead that started him on the long and winding road from mischievous altar boy to national treasure. It includes a tale of gossip in the back yard, bragging in the corner shop and slanging matches on the front doorstep.
Very Good
29 in stock

At My Mother's Knee... Summary

At My Mother's Knee...: And Other Low Joints by Paul O'Grady

Paul O'Grady is one of Britain's very best loved entertainers. He is known and adored by millions, whether as the creator of the acid-tongued Blonde Bombsite, Lily Savage, or the presenter of the fantastically successful, award-winning "Paul O'Grady Show" on Channel 4. Now, in his own unique voice, Paul O'Grady tells story of his early life in Irish Catholic Birkenhead that started him on the long and winding road from mischievous altar boy to national treasure. It is a brilliantly evoked, hilarious and often moving tale of gossip in the back yard, bragging in the corner shop and slanging matches on the front doorstep, populated by larger-than-life characters with hearts of gold and tongues as sharp as razors. "At My Mother's Knee" features an unforgettable cast of rogues, rascals, lovers, fighters, saints and sinners - and one iconic bus conductress.It's a book which really does have something for everyone and which reminds us that, when all's said and done, there's a bit of savage in all of us...

At My Mother's Knee... Reviews

"One of the most brilliantly observed testimonies to working-class life I've ever read" -- Sue Carroll * Mirror *
"Funny, well observed and recognisably human. Soon you start to wonder why all celebrity autobiographies can't be like this" * Private Eye *
"Among the three-for-two slew of sleb lit heaped on the tables of the nation's major bookshops... At My Mother's Knee distinguishes itself on every level" -- Carol Ann Duffy * Observer *
"Paul speaks with warmth and hilarity about a childhood filled with poverty. Hugely interesting and entertaining" * Heat *
"While most celeb memoirs are as memorable as an air kiss, O'Grady's is a proper snog" * Scotsman *
"Warmly funny, dry and mischievous... Genuine - and brilliant" * Daily Mail *

Paul O'Grady first came to fame in the guise of Lily Savage, and was nominated for a Perrier Award at the Edinburgh Festival in 1991. Lily later became a regular on This Morning, took over the bed on The Big Breakfast and presented Blankety Blank, but has now retired (reportedly). Paul, of course, went on to further success presenting his chat shows on Channel 4 and ITV, For the Love of Dogs and Animal Orphans on ITV, and his weekly show on BBC Radio 2, inter alia. His four volumes of autobiography - At My Mother's Knee, The Devil Rides Out, Still Standing and Open the Cage, Murphy - were all Sunday Times bestsellers.

GOR001219535
At My Mother's Knee...: And Other Low Joints by Paul O'Grady
Paul O'Grady
Used - Very Good
Paperback
Transworld Publishers Ltd
2009-06-04
464
0553819488
9780553819489
Short-listed for Galaxy British Book Awards: Tesco Biography of the Year 2009
Book picture is for illustrative purposes only, actual binding, cover or edition may vary.
This is a used book - there is no escaping the fact it has been read by someone else and it will show signs of wear and previous use. Overall we expect it to be in very good condition, but if you are not entirely satisfied please get in touch with us.