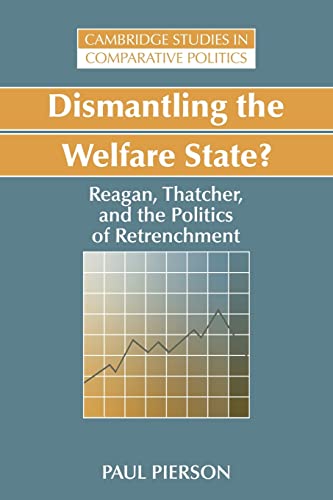 Used Price
$49.99
inc. GST
Free Shipping in Australia
This book examines the politics of social policy in an era of austerity and conservative governance. Focusing on the administrations of Ronald Reagan and Margaret Thatcher, Pierson provides a compelling explanation for the welfare state's durability and for the few occasions where each government was able to achieve significant cutbacks.
Reviews:
Trustpilot
Like New

This book offers a careful examination of the politics of social policy in an era of austerity and conservative governance. Focusing on the administrations of Ronald Reagan and Margaret Thatcher, Pierson provides a compelling explanation for the welfare state's durability and for the few occasions where each government was able to achieve significant cutbacks. The programmes of the modern welfare state - the 'policy legacies' of previous governments - generally proved resistant to reform. Hemmed in by the political supports that have developed around mature social programmes, conservative opponents of the welfare state were successful only when they were able to divide the supporters of social programmes, compensate those negatively affected, or hide what they were doing from potential critics. The book will appeal to those interested in the politics of neo-conservatism as well as those concerned about the development of the modern welfare state. It will attract readers in the fields of comparative politics, public policy, and political economy.

"Pierson's case studies are especially interesting, for they challenge a widely held view that universal programs are more durable than targeted, means-tested programs....Pierson's empirically rich analysis...constitutes a valuable contribution to an understanding of the politics of the contemporary welfare state." American Journal of Sociology
"...[an] insightful, balanced, incredibly lucid, well-organized account of the durability of welfare state programs....Highly recommended for all research collections." Social & Behavioral Sciences
"...path-breaking study." The Economist
"Pierson provides informative, finely grained analyses of the politics of programmed retrenchment in old-age pensions, housing policies, and income support programs....Pierson's theoretical framework provides much insight and understanding of the social welfare policy records of Reagan and Thatcher....this important book can be highly recommended to students and scholars. It is particularly appropriate for advanced undergraduate and graduate courses stressing national institutions, public policy, or political economy. It is essential reading for welfare state researchers and other scholars interested in the politics of social policy in the contemporary era." Duane Swank, American Political Science Review

GOR010825033
Dismantling the Welfare State?: Reagan, Thatcher and the Politics of Retrenchment by Paul Pierson (Harvard University, Massachusetts)
Paul Pierson (Harvard University, Massachusetts)
Cambridge Studies in Comparative Politics
Used - Like New
Paperback
Cambridge University Press
1995-09-29
224
0521555701
9780521555708
N/A
Book picture is for illustrative purposes only, actual binding, cover or edition may vary.
The book has been read, but looks new. The book cover has no visible wear, and the dust jacket is included if applicable. No missing or damaged pages, no tears, possible very minimal creasing, no underlining or highlighting of text, and no writing in the margins.