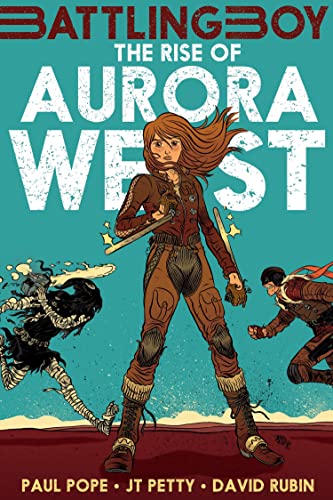 The Rise of Aurora West
by Paul Pope

Used Price
$15.49
inc. GST
Free Shipping in Australia
A prequel to Battling Boy, this title follows the young hero as she seeks to uncover the mystery of her mother's death and to find her place in a world overrun with supernatural monsters and all-too-human corruption.
Very Good

The Rise of Aurora West Summary

The Rise of Aurora West by Paul Pope

A prequel to Battling Boy, The Rise of Aurora West follows the young hero as she seeks to uncover the mystery of her mother's death and to find her place in a world overrun with supernatural monsters and all-too-human corruption. With a taut, fast-paced script from Paul Pope and J. T. Petty and edgy art from David Rubin, this is an addition to the world of Battling Boy that will delight fans of Pope's fascinating storytelling.

The Rise of Aurora West Reviews

"Before she fought alongside Battling Boy for the safety of Acropolis, Aurora West was a teenaged apprentice to her father, the monster hunter/science detective Haggard West, as chronicles in this graphic novel prequel . . . Likely to please Aurora fans from the earlier title, this graphic novel also stands alone, giving readers a bright new heroine to admire." --BCCB

"Pope's lauded Battling Boy takes place in the monster-ridden city of Acropolis, and this prequel, featuring feisty Aurora, the daughter of Acropolis' Bruce Wayne-like hero Haggard West, fills in the backstory of the city and its monster infestation . . . fans of Battling Boy will be eager to get their mitts on this thrilling installment featuring a compelling teen girl hero." --Booklist

"Die-hard fans of the previous work will definitely want to pick up this book." --School Library Journal

"This feels like a very different direction for the characters, and it's a thrilling one; expect readers to clamor for the next installments of this clever spinoff." --Kirkus Reviews

"Paul Pope's delightful and original Battling Boy is the adventure of the year!" --Jeff Smith, Eisner Award-winning author of Bone on Battling Boy

"Full of energy, precision, and pure kick--not to be missed." --Scott Westerfeld, author of Uglies on Battling Boy

Paul Pope is the acclaimed author-illustrator of Batman: Year 100, Heavy Liquid, and 100%. He has won three Eisner Awards, and his first graphic novel for kids, Battling Boy, was a #1 New York Timesbest seller.

JT Petty is an American film director, author, and video game writer. With Paul Pope, he wrote two Battling Boy prequels: The Rise of Aurora WestandFall of the House of West.

David Rubin is a Spanish cartoonist and author of critically-acclaimed graphic novels including The Hero and Beowulf. He directed the animated feature film Spirit of the Forest and has been the subject of a documentary.

GOR006912271
The Rise of Aurora West by Paul Pope
Paul Pope
Used - Very Good
Paperback
Roaring Brook Press
2014-10-13
160
1626720096
9781626720091
N/A
Book picture is for illustrative purposes only, actual binding, cover or edition may vary.
This is a used book - there is no escaping the fact it has been read by someone else and it will show signs of wear and previous use. Overall we expect it to be in very good condition, but if you are not entirely satisfied please get in touch with us.