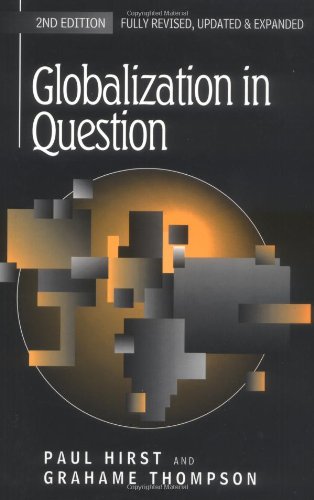 Used Price
$18.99
inc. GST
Free Shipping in Australia
Is there in fact such a thing as a genuinely global economy? This book investigates this notion, providing a different account of the international economy and stressing the possibilities for its continued and extended governance. It is intended for students and academics in a number of disciplines including politics, sociology, and economics.
Reviews:
Trustpilot
Very Good

Globalization in Question: The International Economy and the Possibilities of Governance by Paul Q. Hirst

'Globalization' is one of the key concepts of our time. It is used by both the right and the left as the cornerstone of their analysis of the international economy and polity. In both political and academic discussions, the assumption is commonly made that the process of economic globalization is well under way and that this represents a qualitatively new stage in the development of international capitalism. But is there in fact such a thing as a genuinely global economy? "Globalization in Question" investigates this notion, providing a very different account of the international economy and stressing the possibilities for its continued and extended governance. The new edition of this best-selling text has been thoroughly revised, updated and expanded to take into account new issues which have become salient in the period since the first edition was published, including the impact of the internationalization of economic relations on the welfare state; the various debates about the concept of 'competitiveness'; the Asian crisis; and the relationships between the North and the South in terms of their effects on wage rates and living standards. "Globalization in Question, Second Edition", is a timely intervention into current discussions about the nature and prospects of globalization. This book has far-reaching implications which will be of interest to students and academics in a number of disciplines including politics, sociology, economics and geography, as well as to journalists and policy-makers.

"Paul Hirst and Grahame Thompson offer one of the best and most iconoclastic attempts yet at mapping the new global economy." Will Hutton, The Observer "A timely and critical study of the current discussion about the nature and prospects of a global economy." Business Horizons "One of those rare books that deserve to be read across the social sciences, from economics to politics, sociology and anthropology. Hirst and Thompson show that views about the international economy widely accepted on the right and the left rest on a series of erroneous factual claims. They make a strong case for a social democratic agenda as not only feasible but also more effective than that of economic liberalism." Robert Wade, Brown University

Paul Hirst is Professor of Social Theory, Birkbeck College, University of London and Senior Lecturer in Economics at the Open University.


Grahame Thompson is Professor of Political Economy at the Open University.

GOR002054945
Globalization in Question: The International Economy and the Possibilities of Governance by Paul Q. Hirst
Paul Q. Hirst
Used - Very Good
Paperback
Polity Press
1999-09-30
336
0745621643
9780745621647
N/A
Book picture is for illustrative purposes only, actual binding, cover or edition may vary.
This is a used book - there is no escaping the fact it has been read by someone else and it will show signs of wear and previous use. Overall we expect it to be in very good condition, but if you are not entirely satisfied please get in touch with us.