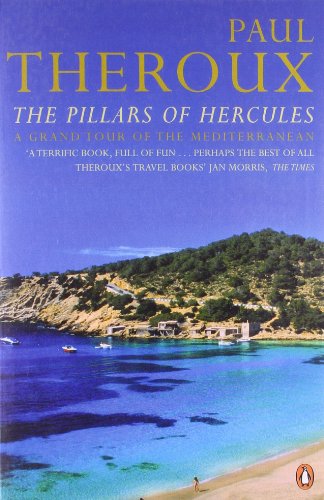 The Pillars of Hercules
by Paul Theroux

In Stock
$16.99
inc. GST
At the gateway to the Mediterranean lie the two Pillars of Hercules: Gibraltar and Ceuta, in Morocco. Paul Theroux decided to travel from one to the other taking the long way round. He travels by a dilapidated taxi, smoke-filled bus, bicycle and even a cruise-liner. This eventful tour aims to evoke the essence of Mediterranean life.
Very Good Good Well Read
12 in stock

The Pillars of Hercules Summary

The Pillars of Hercules: A Grand Tour of the Mediterranean by Paul Theroux

At the gateway to the Mediterranean lie the two Pillars of Hercules: Gibraltar and Ceuta, in Morocco. Paul Theroux decided to travel from one to the other - but taking the long way round.

His grand tour of the Mediterranean begins in Gibraltar and takes him through Spain, the French Riviera, Italy, Greece, Istanbul and beyond. He travels by any means necessary - including dilapidated taxi, smoke-filled bus, bicycle and even a cruise-liner. And he encounters bullfights, bazaars and British tourists, discovers pockets of humanity in war-torn Slovenia and Croatia, is astounded by the urban developments on the Costa del Sol and marvels at the ancient wonders of Delphi.

Told with Theroux's inimitable wit and style, this lively and eventful tour evokes the essence of Mediterranean life.

Paul Theroux has written many works of fiction and travel writing, including the modern classics The Great Railway Bazaar, The Old Patagonian Express, My Secret History and The Mosquito Coast. Paul Theroux divides his time between Cape Cod and the Hawaiian islands.

The cable car to the Rock of Gibraltar; the Mare Nostrum express to Alicante; the MV Punta Europa to Majorca; the Virgen de Guadalupe express to Barcelona and beyond; Le Grand Sud to Nice; the ferry Ile de Baute to Corsica; the ferry Ichnusa to Sardinia; the ferry Torres to Sicily; the ferry - Villa to Calabria; the ferry Clodia from Chioggia; the ferry Liburnija to Zadar; the ferry Venezia to Albania; the MV Seabourne Spirit to Istanbul; the MV Akdeniz through the Levant the 7:20 express to Latakia; the ferry Sea Harmony to Greece; the ferry El-Loud III to Kerkennah; to Morocco on the ferry Boughaz.

GOR000912236
The Pillars of Hercules: A Grand Tour of the Mediterranean by Paul Theroux
Paul Theroux
Used - Very Good
Paperback
Penguin Books Ltd
1996-06-27
544
0140245332
9780140245332
Short-listed for Thomas Cook/Daily Telegraph Travel Book Award 1996
Book picture is for illustrative purposes only, actual binding, cover or edition may vary.
This is a used book - there is no escaping the fact it has been read by someone else and it will show signs of wear and previous use. Overall we expect it to be in very good condition, but if you are not entirely satisfied please get in touch with us.