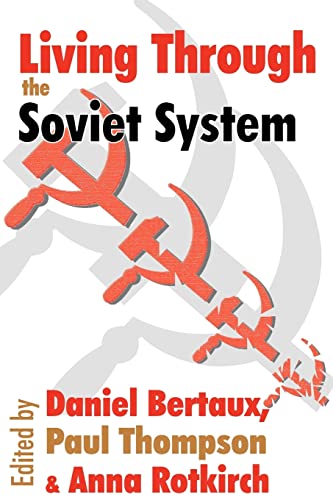 Living Through the Soviet System by Paul Thompson

Analyzing how Russian society operated on a day-to-day level, this book contrasts the integration of different social groups: the descendents of the pre-revolutionary upper classes, the industrial working class, or the ethnically marginalized Russian Jews. It examines in turn the implications of relationships, and the suppression of religion.

Living Through the Soviet System by Paul Thompson

For a period of over seventy years after the 1917 revolutions in Russia, talking about the past, either political or personal, became dangerous. The situation changed dramatically with the new policy of glasnost at the end of the 1980s. The result was a flood of reminiscence, almost nightly on television, and more formally collected by new Russian oral history groups and also by Western researchers. Daniel Bertaux and Paul Thompson both began collecting life story and family history interview material in the early 1990s, and this book is the outcome of their initiative. Living Through the Soviet System analyzes, through personal accounts, how Russian society operated on a day-to-day level. It contrasts the integration of different social groups: the descendents of the pre-revolutionary upper classes, the new industrial working class, or the ethnically marginalized Russian Jews. It examines in turn the implications of family relationships, working mothers, absent fathers and caretaking grandmothers; patterns of eating together, and of housing; the secrecy of sex; the suppression of religion; and the small freedoms of growing vegetables on weekends on a dacha plot. Because of its basis in direct testimonies, the book reveals in a highly readable and direct style the meaning for ordinary men and women of living through those seven dark decades of a great European nation. Because of the centrality of Soviet Russia to the history of the twentieth-century world, this book will be of interest to a wide range of readers. It will be of importance to students, researchers and teachers of history and sociology, as well as specialists in East European and other communist societies.

Daniel Bertaux is directeur de recherches at the Centre d'Etudes des Mouvements Sociaux, Ecole des Hautes Etudes en Sciences Sociales, Paris. Paul Thompson is research professor in sociology at the University of Essex and fellow at the Institute of Community Studies in London. Anna Rotkirch is a lecturer in sociology at the University of Helsinki.
NLS9781412804875
9781412804875
1412804876
Living Through the Soviet System by Paul Thompson
Paul Thompson
Memory and Narrative
New
Paperback
Taylor & Francis Inc
2005-01-11
286
N/A
Book picture is for illustrative purposes only, actual binding, cover or edition may vary.
This is a new book - be the first to read this copy. With untouched pages and a perfect binding, your brand new copy is ready to be opened for the first time
Trustpilot