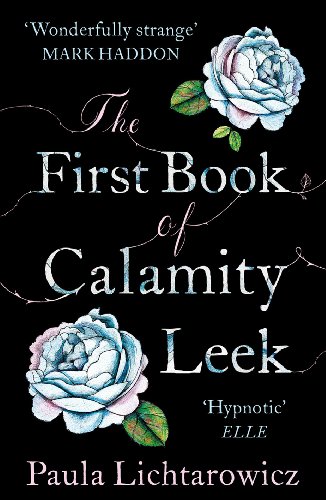 The First Book of Calamity Leek
by Paula Lichtarowicz

In Stock
$13.69
inc. GST
This debut novel tells the story of Calamity Leek: a girl who has never been allowed beyond the garden wall, until now.

Lying in her hospital bed, broken, burned and scared, Calamity still believes that Aunty loved her.

The First Book of Calamity Leek by Paula Lichtarowicz

Brilliantly inventive and original. This debut novel tells the story of Calamity Leek: a girl who has never been allowed beyond the garden wall, until now.

Lying in her hospital bed, broken, burned and scared, Calamity still believes that Aunty loved her. For as long as she can remember, Calamity, along with her sixteen sisters, lived in a Garden behind the Wall of Safekeeping. Like it said in Aunty's Appendix on the first page of the Ps: 'Everything has a purpose', and they were being trained for a very special one. In the Ns the Appendix said, 'Nosiness leads to nonsense'. As Calamity sees it, this is what led to their Garden's downfall, because when the sisters started questioning what was outside the Wall, they started questioning what was happening inside it too.

But doubt is contagious.
Watching your world crumble is frightening.
And people who are frightened can be dangerous.

Wonderfully strange -- Mark Haddon, author of THE CURIOUS INCIDENT OF THE DOG IN THE NIGHT-TIME
This hypnotic debut novel - one of the hottest reads of the year - is no ordinary book. It combines pitch-perfect teen angst with a fantastical setting and premise; as much a hymn to reading as a gripping story. * Elle *
A compelling page turning read * Style magazine *
Deeply perplexing . . . as hints of the reality behind the fantasy start to emerge, the story develops its own peculiar and intense momentum. -- Nick Rennison * Sunday Times *
A fantastic novel, and a really exciting and engaging new voice. The fact that the reader has to work hard to understand this world makes it all the more compelling, and it packs quite an emotional punch when we realise what's going on. I couldn't put it down, and loved the voice of Calamity, and her vulnerability and reliance on her world, while the reader could see it cracking wide open, was heartbreaking. -- Jess Richards, author of SNAKE ROPES

Paula Lichtarowicz lives in London and works in television production. This is her first novel.

GOR005534167
The First Book of Calamity Leek by Paula Lichtarowicz
Paula Lichtarowicz
Used - Very Good
Paperback
Cornerstone
2014-01-15
304
0099558777
9780099558774
N/A
Book picture is for illustrative purposes only, actual binding, cover or edition may vary.
This is a used book - there is no escaping the fact it has been read by someone else and it will show signs of wear and previous use. Overall we expect it to be in very good condition, but if you are not entirely satisfied please get in touch with us.