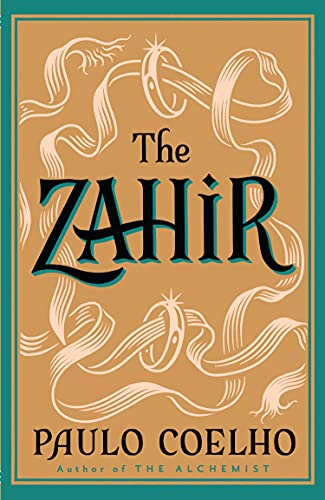 The Zahir
by Paulo Coelho

`The Zahir', Paulo Coelho's new novel available in paperback for the first time, incorporates exclusive new content including an extra section containing interviews with Paulo and plenty of information for those for whom the book just wasn't enough.

The Zahir: A Novel of Obsession by Paulo Coelho

`The Zahir', Paulo Coelho's new novel available in paperback for the first time, incorporates exclusive new content including an extra section containing interviews with Paulo and plenty of information for those for whom the book just wasn't enough.

It begins with a glimpse or a passing thought. It ends in obsession.

One day a renowned author discovers that his wife, a war correspondent, has disappeared leaving no trace. Though time brings more success and new love, he remains mystified - and increasingly fascinated - by her absence. Was she kidnapped, blackmailed, or simply bored with their marriage? The unrest she causes is as strong as the attraction she exerts.

His search for her - and for the truth of his own life - takes him from France to Spain, Croatia and, eventually, the bleakly beautiful landscape of Central Asia. More than that, it takes him from the safety of his world to a totally unknown path, searching for a new understanding of the nature of love and the power of destiny.

With `The Zahir', Paulo Coelho demonstrates his powerful and captivating storytelling.

'Coelho's writing is beautifully poetic but his message is what counts... he gives me hope and puts a smile on my face.' DAILY EXPRESS

'His books have had a life-enhancing impact on millions of people.' TIMES

'One of the few to deserve the term "Publishing Phenomenon".' INDEPENDENT ON SUNDAY

'Coelho's talent to inspire his readers with wisdom and hope ... is as strong as ever. There is a forgiving kindness and humanity that is unmistakeable and tremendously appealing.' DAILY MAIL

`It's like music, really, the way he writes, it's so beautiful. It's a gift that I envy above all others.' JULIA ROBERTS

Paulo Coelho was born in Brazil and has become one of the most widely read and loved authors in the world. Especially renowned for The Alchemist and Eleven Minutes, he has sold more than 85 million books worldwide and has been translated into 63 languages. The recipient of numerous prestigious international awards, amongst them the Crystal Award by the World Economic Forum and France's Legion d'Honneur, Paulo Coelho was inducted into the Brazilian Academy of Letters in 2002. He writes a weekly column syndicated throughout the world.

GOR010240077
The Zahir: A Novel of Obsession by Paulo Coelho
Paulo Coelho
Used - Like New
Paperback
HarperCollins Publishers
2006-05-02
368
0007220855
9780007220854
N/A
Book picture is for illustrative purposes only, actual binding, cover or edition may vary.
The book has been read, but looks new. The book cover has no visible wear, and the dust jacket is included if applicable. No missing or damaged pages, no tears, possible very minimal creasing, no underlining or highlighting of text, and no writing in the margins.