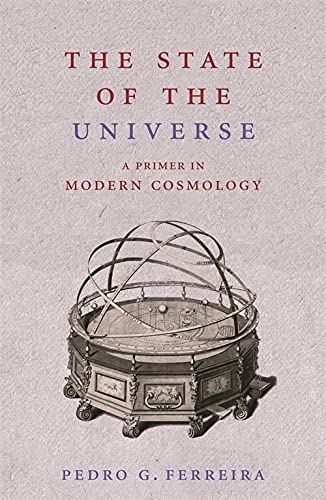 The State of the Universe
by Pedro Ferreira

In Stock
$19.99
inc. GST
A masterly overview of the development of cosmological thinking from the Greeks, via Newton and Einstein, to the present day.
Very Good Good
Only 4 left

The State of the Universe Summary

The State of the Universe: A Primer in Modern Cosmology by Pedro Ferreira

A masterly overview of the development of cosmological thinking from the Greeks, via Newton and Einstein, to the present day.

It is science's last and greatest challenge: fathoming the depths of the night sky. The objective: to crack the cosmic code, to unravel the blueprint for nature's grandest conception, a machine constructed on an unimaginably vast scale - the Universe itself.

Today's model of an expanding Universe - the big bang cosmology - is actually built on principles derived from a few simple mathematical equations. Gravity-warped space time, quantum mechanics, the physics of the subatomic, these crucial insights, stemming from Einstein's revolutionary theories of relativity, have led to a simple and elegant framework within which the whole of the Universe, over billions of years, has been described.

But recent evidence has begun to make wrinkles in the neat fabric of the big bang cosmology. There is now overwhelming evidence that there is far more stuff in the Universe than we can see. What, and where, is this 'dark matter'? And it now appears that the expansion of the Universe is accelerating: something out there - some exotic 'dark energy' - is acting against gravity to push space and time apart.

While offering a critical view of how all the pieces in our current model fit together, Pedro Ferreira argues that Einstein's Universe may be just another stepping stone towards a new, more profound and effective cosmology in the future.

The State of the Universe Reviews

Authoritative, accurate, clear and up to date--The Independent
Ferreira does a good job of balancing the likely with the improbable--Financial Times
Deeply interesting--Guardian

Pedro Ferreira is a Lecturer in Astrophysics at the University of Oxford and a Tutor and Fellow of Oriel College. He studied physics at the Technical University of Lisbon and obtained a doctorate from Imperial College, London in 1995. He has been a researcher at the University of California at Berkeley, at CERN in Geneva and was awarded a Royal Society University Research Fellowship in 2000. He has given seminars and lecture courses at more than fifty institutions and has published over eighty scientific papers, conference proceedings and popular articles. His work focuses on the relic radiation left over from the Big Bang and the physical principles of the beginning of the Universe. He has a keen interest in education in Africa, teaching at the African Institute of Mathematical Sciences in Cape Town, and has hosted or collaborated with a number of artists on the interface between art and science.

GOR002466701
The State of the Universe: A Primer in Modern Cosmology by Pedro Ferreira
Pedro Ferreira
Used - Very Good
Paperback
Orion Publishing Co
2007-08-08
320
0753822563
9780753822562
N/A
Book picture is for illustrative purposes only, actual binding, cover or edition may vary.
This is a used book - there is no escaping the fact it has been read by someone else and it will show signs of wear and previous use. Overall we expect it to be in very good condition, but if you are not entirely satisfied please get in touch with us.