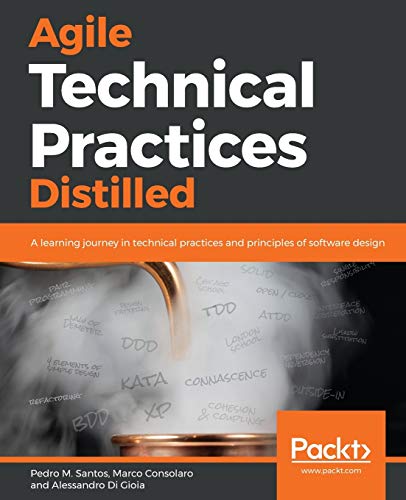 This book takes you on a learning journey - discover new ideas for improving your software design skills, the relationship within your team, and the way your business works. It starts by discussing individual practices, such as pair programming and simple design, and ends by showing how you can benefit by taking a business-oriented ...

Delve deep into the various technical practices, principles, and values of Agile.

The number of popular technical practices has grown exponentially in the last few years. Learning the common fundamental software development practices can help you become a better programmer. This book uses the term Agile as a wide umbrella and covers Agile principles and practices, as well as most methodologies associated with it.

You'll begin by discovering how driver-navigator, chess clock, and other techniques used in the pair programming approach introduce discipline while writing code. You'll then learn to safely change the design of your code using refactoring. While learning these techniques, you'll also explore various best practices to write efficient tests. The concluding chapters of the book delve deep into the SOLID principles - the five design principles that you can use to make your software more understandable, flexible and maintainable.

By the end of the book, you will have discovered new ideas for improving your software design skills, the relationship within your team, and the way your business works.

What you will learnWho this book is for

This book is designed for software developers looking to improve their technical practices. Software coaches may also find it helpful as a teaching reference manual. This is not a beginner's book on how to program. You must be comfortable with at least one programming language and must be able to write unit tests using any unit testing framework.

Pedro M. Santos has over 25 years of experience in the software industry. He has worked in the finance, aviation, consultancy, media, and retail industries and has built a wide range of software, ranging from embedded systems to cloud-based distributed applications. He has lived in Portugal (Lisbon), Brazil (Sao Paulo), Spain (Madrid, Barcelona), Netherlands (Hilversum), and Belgium (Gent), and, currently, he is based in the UK (London), where he focuses on educating and inspiring other developers. He has spent hundreds of hours in pairing sessions as well as coaching and mentoring developers at all levels of proficiency. His tutoring experience covers almost every aspect of software development: programming basics, object-oriented and functional design principles, refactoring legacy applications, pragmatic testing practices, architectural decisions, and career development choices. Follow Pedro on Twitter at @pedromsantos. Marco Consolaro is a software craftsman, systems thinker, agile technical coach, entrepreneur, philosopher, and restless traveler - all blended with Venetian humor. Marco learned to code in Basic on a Commodore when he was 9 years old. He graduated from Venice University in 2001 with a degree in Computer Science. Since then, Marco has worked in Italy and the UK and is always looking to learn something new. When his journey led him to the agile principles, he quickly realized the effectiveness of such an approach for both technical and organizational areas. He now strongly believes that an iterative approach based on trust, transparency, self-organization, and quick feedback loops is the key to success for any team in any discipline. His dream is to see these principles based on systems thinking understood and implemented at every level in businesses and public administrations. Follow Marco on Twitter at @consolondon. Alessandro Di Gioia has helped a variety of companies (from small startups to large enterprises for the past 18 years) embrace agile technical practices. He has worked in Italy and Norway. For the past few years, he has resided in London. His professional life changed when he came across agile methodologies, especially Extreme Programming. He likes concise, expressive, and readable code as well as making existing solutions better when needed. He is always trying to learn better ways of designing asynchronous distributed architectures and crafting software, in either an object-oriented or functional style. Although Alessandro considers himself a forever learner, he is also a coach and a mentor because he loves to share his experiences with others. Follow Alessandro on Twitter at @Parajao.
Table of Contents
NLS9781838980849
9781838980849
1838980849
Agile Technical Practices Distilled: A learning journey in technical practices and principles of software design by Pedro M. Santos
Pedro M. Santos
New
Paperback
Packt Publishing Limited
2019-06-28
442
N/A
Book picture is for illustrative purposes only, actual binding, cover or edition may vary.
This is a new book - be the first to read this copy. With untouched pages and a perfect binding, your brand new copy is ready to be opened for the first time
Trustpilot