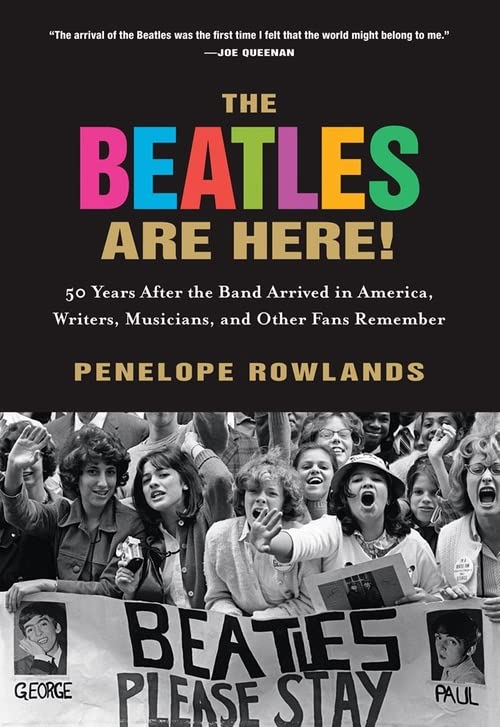 The Beatles are Here!
by Penelope Rowlands

The Beatles are Here! Summary

The Beatles are Here!: 50 Years After the Band Arrived in America, Writers and Other Fans Remember by Penelope Rowlands

The arrival of the Beatles was one of those unforgettable cultural touchstones. Through the voices of those who witnessed it or were swept up in it indirectly, The Beatles Are Here! explores the emotional impact-some might call it hysteria-of the Fab Four's February 1964 dramatic landing on our shores. Contributors, including Lisa See, Gay Talese, Renee Fleming, Roy Blount, Jr., and many others, describe in essays and interviews how they were inspired by the Beatles.

This intimate and entertaining collection arose from writer Penelope Rowlands's own Beatlemaniac phase: she was one of the screaming girls captured in an iconic photograph that has since been published around the world-and is displayed on the cover of this book. The stories of these girls, who found each other again almost 50 years later, are part of this volume as well. The Beatles Are Here! gets to the heart of why, half a century later, the Beatles still matter to us so deeply.

The Beatles are Here! Reviews

"A goody bag of tributes and recollections." --Vanity Fair

"One of the more fascinating new books on the Fab Four's impact." --The Boston Globe

"A great crop of recollections of the first wave of Beatlemania. There are reminiscences by fans from big cities and tiny towns, some sweet, some hilarious." --Tampa Bay Times

"This winsome book is overwhelmingly infused with affection both for the Beatles and for the opportunity to revisit childhood and adolescent memories . . . Readers seeking a nostalgia-tinged picture of the Beatles are in for a treat." --Library Journal

"In this compulsively readable personal history, Rowlands gathers the recollections of fans, writers, musicians, and artists about the deep ways that the Beatles and their music affected them." --Publishers Weekly

PENELOPE ROWLANDS has written about culture and the arts for Architectural Digest, the Daily Beast, Vogue, WSJ. Magazine, and other publications. Her books include the anthology Paris Was Ours and A Dash of Daring: Carmel Snow and Her Life in Fashion, Art, and Letters, a biography of the legendary editor-in-chief of Harper's Bazaar. Find her at www.peneloperowlands.com.

GOR009304642
The Beatles are Here!: 50 Years After the Band Arrived in America, Writers and Other Fans Remember by Penelope Rowlands
Penelope Rowlands
Used - Very Good
Paperback
Algonquin Books (division of Workman)
2014-02-28
255
1616203501
9781616203504
N/A
Book picture is for illustrative purposes only, actual binding, cover or edition may vary.
This is a used book - there is no escaping the fact it has been read by someone else and it will show signs of wear and previous use. Overall we expect it to be in very good condition, but if you are not entirely satisfied please get in touch with us.