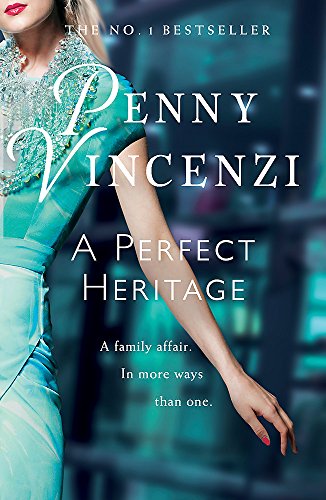 A Perfect Heritage
by Penny Vincenzi

Used Price
$36.99
inc. GST
Free Shipping in Australia
A family affair. In more ways than one. The irresistible new novel from the No. 1 bestselling Penny Vincenzi. The Original and The Best.
Reviews:
Trustpilot
Like New Very Good Good

A Perfect Heritage by Penny Vincenzi

The House of Farrell - home of The Cream, an iconic face product that has seen women flocking to its bijoux flagship store in the Berkeley Arcade since 1953.

At Farrell, you can rely on the personal touch. The legendary Athina Farrell remains the company's figurehead and in her kingdom at the Berkeley Arcade, Florence Hamilton plies their cosmetics with the utmost discretion. She is sales advisor - and holder of secrets - extraordinaire.

But of course the world of cosmetics is changing and the once glorious House of Farrell is now in decline, its customers tempted away by more fashionable brands.

Enter Bianca Bailey, formidable business woman, mother of three, and someone who always gets her way. Athina and Bianca lock horns over the future of the House of Farrell but it is the past that tells its devastating tale of ambition and ego, passion and wonder.

Here is a tale of survival ... and a perfect heritage.

'There are few things better in life than the knowledge that sitting on your bedside table is the latest novel by Penny Vincenzi...Penny never fails her devoted fans' * Daily Express *

Penny Vincenzi, who died in 2018, was one of the UK's best-loved and most popular authors. Since her first book, Old Sins, was first published in 1989, she went on to write sixteen more bestselling novels and two collections of stories. She began her career as a junior secretary for Vogue magazine and went on to work at The Daily Mirror, Tatler, and later as a Fashion and Beauty Editor on magazines such as Woman's Own, Nova and Honey, before becoming a Deputy Editor of Options and Contributing Editor of Cosmopolitan. Over seven million copies of Penny's books have been sold worldwide and she is universally held to be the 'doyenne of the modern blockbuster' (Glamour).

GOR006470700
A Perfect Heritage by Penny Vincenzi
Penny Vincenzi
Used - Like New
Hardback
Headline Publishing Group
2014-06-19
768
0755377575
9780755377572
N/A
Book picture is for illustrative purposes only, actual binding, cover or edition may vary.
The book has been read, but looks new. The book cover has no visible wear, and the dust jacket is included if applicable. No missing or damaged pages, no tears, possible very minimal creasing, no underlining or highlighting of text, and no writing in the margins.