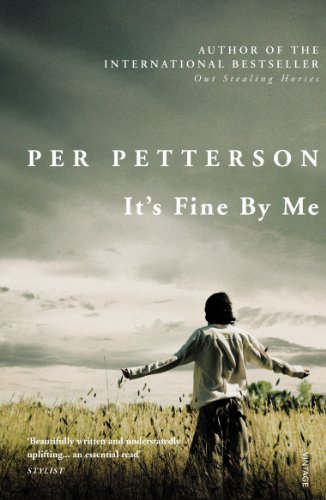 It's Fine By Me
by Per Petterson

Used Price
$14.99
inc. GST
Free Shipping in Australia
Audun is the only one of his family who remains with his mother in working-class Oslo. Stories about his family, the weeks he spent living in a couple of cardboard boxes, and the day of his little brother's birth, when his drunken father fired three shots into the ceiling.
Reviews:
Trustpilot
Very Good Good Well Read

It's Fine By Me Summary

It's Fine By Me by Per Petterson

Audun is the only one of his family who remains with his mother in working-class Oslo. He delivers newspapers when he is not in school and talks for hours about Jack London and Ernest Hemingway with his best friend - but there are some things Audun won't talk about. Stories about his family, the weeks he spent living in a couple of cardboard boxes, and the day of his little brother's birth, when his drunken father fired three shots into the ceiling. A beautiful and disquieting coming-of-age story from the winner of the Independent Foreign Fiction Prize and the International IMPAC Dublin Literary Award.

Customer Reviews - It's Fine By Me

It's Fine By Me Reviews

"* an intriguing story featuring all of the Petterson quirks - charm, melancholy, loneliness, the rifts between parents and children, the bonds between siblings and friends" * Reading Matters *
"Beautifully written and understatedly uplifting, It's Fine By Me is an essential read" * Stylist *
"Beguiling and beautiful... a gripping and subtle coming-of-age story, ripe with melancholy... graceful and moving" * Daily Telegraph *
"Executed with not only a magical attention to detail but also with heart-swelling affection... page after page of clear, glitchless and truthful writing" * Financial Times *
"A movingly observed story about growing up" * The Times *

Per Petterson was born in Oslo in 1952 and worked for several years as an unskilled labourer, a bookseller, a writer and a translator until he made his literary debut in 1987 with the short story collection Ashes in my Mouth, Sand in my Shoes, which was widely acclaimed by critics. He made his literary breakthrough in 2003 with the prizewinning novel Out Stealing Horses, which has been translated into forty-nine languages so far and won many prizes. His second novel To Siberia was published to critical acclaim in 2008. Don Bartlett lives in Norfolk and works as a freelance translator of Scandinavian literature. He has translated, or co-translated, Norwegian novels by Lars Saabye Christensen, Roy Jacobson, Ingvar Ambjornsen, Kjell Ola Dahl, Gunnar Staalesen, Pernille Rygg and Jo Nesbo.

GOR004308189
It's Fine By Me by Per Petterson
Per Petterson
Used - Very Good
Paperback
Vintage Publishing
2012-11-01
208
0099548380
9780099548386
N/A
Book picture is for illustrative purposes only, actual binding, cover or edition may vary.
This is a used book - there is no escaping the fact it has been read by someone else and it will show signs of wear and previous use. Overall we expect it to be in very good condition, but if you are not entirely satisfied please get in touch with us.