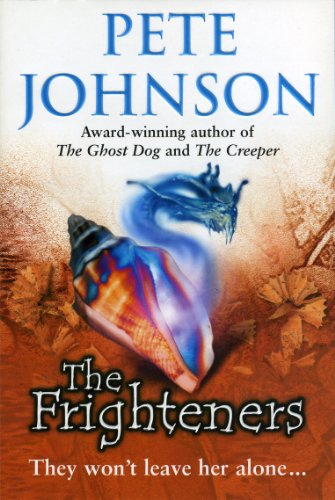 The Frighteners
by Pete Johnson

In Stock
$14.49
+10% GST
When Chloe starts at a new school, she gets off to a really bad start and no-one wants to be her friend - except Aidan. But everyone else seems scared of Aidan - scared of the pictures he draws. For now the Frighteners - horrifying monstrous creatures - won't leave her alone...
Very Good
Only 2 left

The Frighteners by Pete Johnson

On the back of the picture were two words which jumped right out at me: THE FRIGHTENERS... When Chloe starts at a new school, she gets off to a really bad start and no-one wants to be her friend - except Aidan. But everyone else seems scared of Aidan - scared of the pictures he draws. Chloe can't imagine why until she picks up one of his drawings of 'The Frighteners'. For now the Frighteners - horrifying monstrous creatures - won't leave her alone...

"Prepare to be thoroughly spooked" * Daily Mail *
"Pete Johnson is a wonderful story-teller" * London Evening Standard *
"Pete Johnson has proved himself time and time again to be an author of exceptional talents and his stories cover a wide array of topics and issues in a sensitive, humorous and down-to-earth style that children and teenagers can easily identify with" * The School Librarian *
"Pete Johnson is a master storyteller of hair-raising ghost stories and he captures the moods and concerns of teenagers perfectly. Readers will live the experience, feel the shocks and scares but ultimately they will also learn about themselves and their world" * The Bookseller *

PETE JOHNSON began work as a film critic for Radio One, then became a teacher. His experiences in the classroom inspired him to write his first book for children, and he still keeps contact with a panel of young readers to gain their viewpoint as he writes. He is the author of over forty books, including the bestselling How To Train Your Parents. Pete's books have won various awards, including the Young Telegraph Award and the Brilliant Book Award, and have been translated into twenty-three languages. He lives in St Albans.

GOR009674259
The Frighteners by Pete Johnson
Pete Johnson
Used - Very Good
Paperback
Random House Children's Publishers UK
2016-05-02
160
0440871492
9780440871491
N/A
Book picture is for illustrative purposes only, actual binding, cover or edition may vary.
This is a used book - there is no escaping the fact it has been read by someone else and it will show signs of wear and previous use. Overall we expect it to be in very good condition, but if you are not entirely satisfied please get in touch with us.