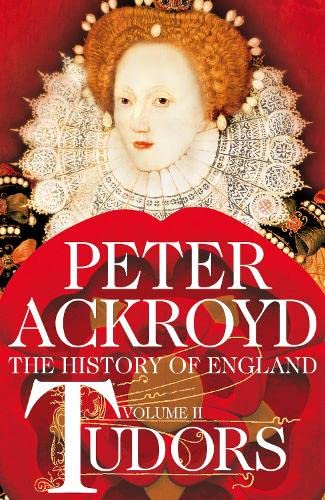 Out of Stock
$33.99
inc. GST
The second volume of Peter Ackroyd's masterful history of England: Tudors
Very Good
Only 0 left

Tudors: A History of England Volume II by Peter Ackroyd

Rich in detail and atmosphere and told in vivid prose, Tudors recounts the transformation of England from a settled Catholic country to a Protestant superpower. It is the story of Henry VIII's cataclysmic break with Rome, and his relentless pursuit of both the perfect wife and the perfect heir; of how the brief reign of the teenage king, Edward VI, gave way to the violent reimposition of Catholicism and the stench of bonfires under 'Bloody Mary'. It tells, too, of the long reign of Elizabeth I, which, though marked by civil strife, plots against the queen and even an invasion force, finally brought stability.

Above all, however, it is the story of the English Reformation and the making of the Anglican Church. At the beginning of the sixteenth century, England was still largely feudal and looked to Rome for direction; at its end, it was a country where good governance was the duty of the state, not the church, and where men and women began to look to themselves for answers rather than to those who ruled them.

Peter Ackroyd is an award-winning novelist, as well as a broadcaster, biographer, poet and historian. He is the author of the acclaimed non-fiction bestsellers, Thames: Sacred River and London: The Biography. He holds a CBE for services to literature and lives in London.

GOR005611368
Tudors: A History of England Volume II by Peter Ackroyd
Peter Ackroyd
Used - Very Good
Paperback
Pan Macmillan
2012-09-13
352
023076407X
9780230764071
N/A
Book picture is for illustrative purposes only, actual binding, cover or edition may vary.
This is a used book - there is no escaping the fact it has been read by someone else and it will show signs of wear and previous use. Overall we expect it to be in very good condition, but if you are not entirely satisfied please get in touch with us.